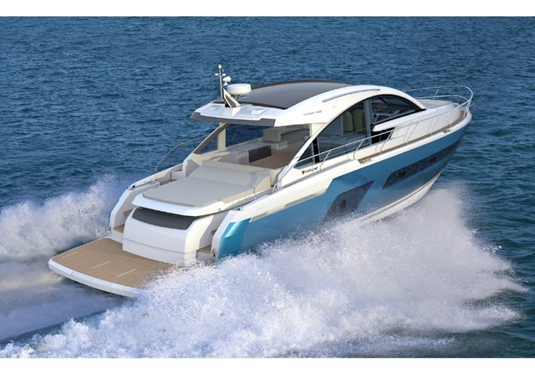 The latest addition to the Fairline Yachts family, the Targa 53 OPEN has been designed to maximise natural light, adding brightness to the spacious master cabin, galley and saloon below.

The cockpit boasts a large three person sun bed over the tender garage, generous ‘U’ shaped cockpit seating with a wet bar opposite and roomy companion seating across from the helm.

Owners can choose between a two or three cabin configuration, according to their needs.

The Targa 53 OPEN offers a choice of three shaft driven engine options: two from Volvo and one from Caterpillar, offering a minimum fully loaded speed in excess of 30 knots and a range of at least 300 nautical miles is expected. There will also be the option to add stabilisation, with a choice of either fin or gyroscopic stabilisers.

Fairline Yachts’ Head of Design  Andrew Pope, says, “Owners tell us that entertaining is one of the most important reasons for having a luxury cruiser and the Targa 53 OPEN provides a sense of style, space and comfort like no other. This new model opens up a host of possibilities thanks to its unrivalled comfort, space and flexibility. All our 53ft models have a common platform approach, offering complete flexibility of layout and options to suit each individual customer, which is at the heart of Fairline’s design philosophy.”

The  Targa 53 OPEN will debut at the Cannes Boat Show, France on Tuesday 6 September 2016 and it will premiere in the UK at the Southampton Boat Show on Friday 16 September 2016.

Motorboat & Yachting: The first Fairline model completed under new Russian ownership rolled out of the Oundle factory this week. 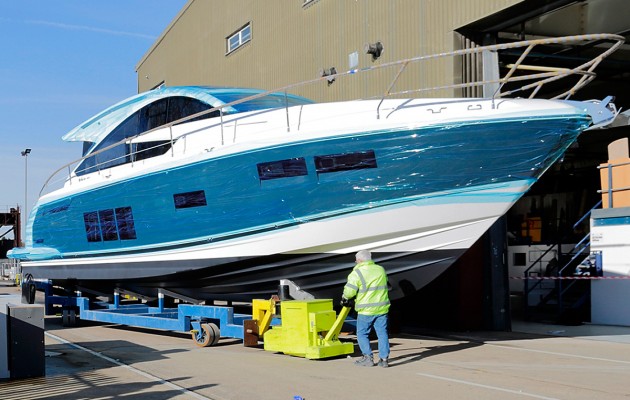 Fairline Yachts is celebrating after the first model rolled off the production line today, a Fairline Targa 48GT model which was sold by Fairline’s primary brokerage firm Bates Wharf.

Fairline Yachts was bought out of administration by UK-based Russian investors Alexander Volvo and Igor Glyanenko on 25 January 2016.

The new company has resumed production and completed the first of the handful of models left unfinished only six weeks after by previous owners Wessex Bristol when Fairline Boats was placed into administration in December last year.

“This is a significant occasion and one we want to celebrate. We are delivering on our promise to complete all orders for boats received by the previous owners”, said Russell Currie, managing director at Fairline Yachts.

Motorboat & Yachting: Fairline Yachts will make its comeback in a big way at the 2016 British Motor Yacht Show, with five models on display from 42ft to 60ft.

Fairline Yachts has confirmed that it will be exhibiting five models at the upcoming 2016 British Motor Yacht Show.

The boat show at Swanwick Marina from 20-22 May 2016 will see Fairline Yachts relaunch itself after recent buyout by Russian investors.

Fairline models will be at display with range from 42ft-60ft including models from the Targa and Squadron collections.

The boat show was first launched in 2013 and it aims to provide a boutique atmosphere for serious buyers. Attendance and parking is free, but anyone interested in booking a private viewing of one of the models on display is advised to call ahead.

Motorboat & Yachting: Fairline will make a comeback at the 2016 Miami Boat Show with their Fairline Targa 53GT and Targa 48 Open. 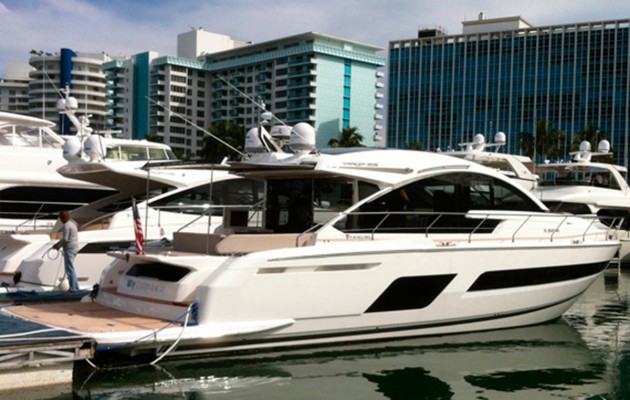 Fairline Yachts is making their first official public comeback at the 2016 Miami Boat Show this weekend, as their local broker G Marine will be representing the brand for the first time since coming out of administration.

On display at Miami Boat Show starting from Monday 15th February 2016, will be Fairline Targa 53GT and Targa 48 Open.

“South Florida is among the largest leisure boat markets and we are keen to continue the long-term relationship with G Marine in Miami. G Marine is one of the crown jewels, and we appreciate the company’s experience and input as we are focused on developing new and exciting models.”, said Miles Moorhouse, marketing manager at Fairline Yachts.

This willl be the first boat show appearance for new company Fairline Yachts after being bought out of administration last month by Russian investors Igor Glyanenko and Alexander Volov in an estimated deal believed to be worth £4.5million.

Russell Currie, director of brokerage firm Fairline North Mallorca, has been appointed as the managing director of Fairline Yachts and the company has also recently confirmed its plans for their UK comeback at the British Motor Yacht Show in May and London On-Water Boat Show.

Motorboat & Yachting: Bates Wharf has announced that it will be bringing a Fairline Targa 38 to the 2016 London On-Water Boat Show. 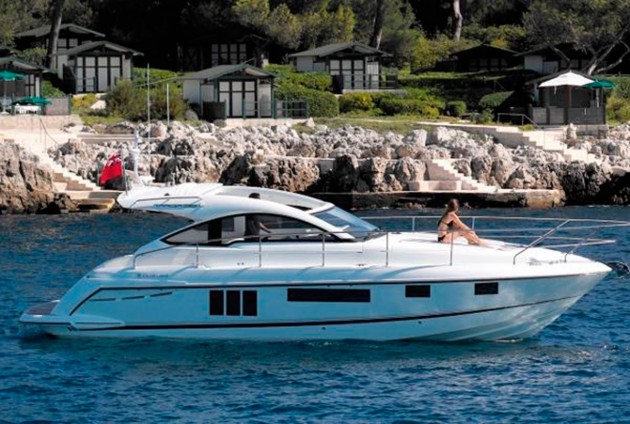 Bates Wharf has signed up for the 2016 London On-Water Boat Show and will display a Fairline Targa 38.

The boat show will be in London’s St Katharine Docks from May 4-7 2016 with other exhibitors such as Wessex Marina and  Princess Yachts.

The presence of Bates Wharf is significant as it will be the first exhibition of a new Fairline model since the company was bought out of administration by new Russian owners last month.

The Fairline Targa 38 is the entry-level model in the Fairline Boats collection, and with the largest engine option of twin 400hp Volvo Penta D6 engines fitted, this is the fastest Fairline model ever with a top speed of over 40 knots.

Tickets are on sale now for the London On-Water Boat Show 2016 with prices starting from £9 per person.

Motorboat & Yachting: Fairline Boats has announced a major change to its dealer network, with Bates Wharf Marine Sales taking over as its exclusive dealer for the South Coast.

Bates Wharf Marine Sales has strengthened its ties with Fairline Boats, taking over as the brand’s exclusive dealer for the South Coast. The brokerage, which already has offices in Poole, Chertsey and Eastbourne, will also be moving into the Fairline Southampton premises in Swanwick.

Douglas Culverwell, regional sales director for Europe at Fairline Boats, said: “This exciting news ensures we maintain key coverage across the South Coast of the UK.

“Richard Bates and his team have a wealth of marine experience which our customers can really benefit from.”

Colin Sykes, CEO of Fairline, added that the firm is also working on “other regional appointments” that will be announced soon. Established more than 100 years ago, Bates Wharf Marine Sales will be supported by fellow Fairline dealers Fairline Wales and Fairline Channel Islands.

The news comes just over three months after Fairline announced that it would no longer be working with Boats.co.uk (formerly Essex Boatyards), which had been its main dealer for five years.

Fairline Boats is claiming a major coup after appointing former Sunseeker sales manager Karl Gilding, who has re-joined Fairline to head up the yacht sales division, after two years working for the firm’s Poole-based rivals.

Fairline added that Karl will help to build up the brand’s dealer network in North America, an area which is expected to show future growth. As the first UK importer of Sea Ray boats, Karl has plenty of experience in yacht sales, and his first stint at Fairline lasted 17 years.

Colin Sykes, CEO of Fairline Boats, said: “We are very pleased to be welcoming Karl back to our global sales team. “He brings extensive knowledge of both Fairline’s heritage and the global leisure boating sector as a whole to the role.”

Colin took this opportunity to stress the strength of Fairline’s order book, which is at its highest level for two years, excluding advance orders for the recently announced Targa 53GT and Squadron 53. Motorboat & Yachting: Fairline has announced that it is gearing up for a new product range, following the appointment of two senior engineers.

British boatbuilder Fairline has dropped a huge hint that it will be launching a new range of boats in the near future. Announcing the appointment of two senior engineers today (24 October), the company claimed that it is preparing for “an extensive new product introduction programme”. Fairline was one of the few major manufacturers not to launch a brand new model at last month’s Southampton Boat Show (12-21 September).

However, the appointment of Stefan Whitmarsh as head of engineering and Ben Harrison as engineering manager suggests that something new is on the way. Mr Whitmarsh in particular has previous with new launches, as he was project manager for the launch of the first Sunseeker 155, Blush.

Fairline added that Stefan will be “responsible for driving the new product introduction programme and developing the design and engineering systems across the product range”.

Quite what his team comes up with and whether it will be ready in time for the 2015 London Boat Show (9-18 January) remains to be seen.