Motorboat & Yachting: A new Hardy 62 with a whole host of changes, including an updated interior, will hit the water in 2016. 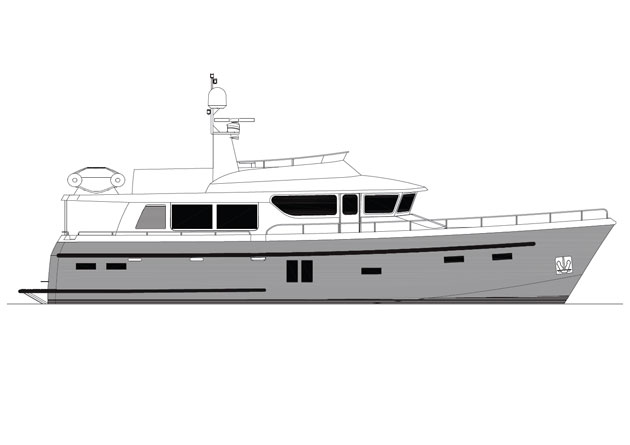 We spent a lot of time on board Hardy 62 hull number one. In fact, we took it from Ocean Village in Southampton over 200 miles to its home in Fox’s Marina in Ipswich.

We stayed on board for a night, took it in and out of marinas, charged along at 25 knots and dawdled in single figures. We got under the skin of the 62 and came to the conclusion that there was a fantastic boat begging to get out.

The first boat, the Southampton show boat, was designed for a Russian owner who as well as specifying a gun cabinet in the master cabin settled for a solid if rather drab and uninspiring interior and seemed to want a boat that felt more rugged than refined.

Hull number two, though, which is currently in mould at the factory in Norfolk is going to hit the water with a whole host of improvements, that will hopefully transform the 62 from a good boat to a great one and one that can comfortably go head to head with the best.

So, what’s changed? Firstly the traditional interior is out in place of what Hardy says is a far more modern “but not glitzy” effort. This is good news and if the rendering below is anything to go by the new interior should be really rather special.

There’s a vibrant mix of grey woods and more traditional walnut, stylish fabric wall panels, improved lighting and, thankfully, Hardy has finally succumbed to using large hull windows. Okay, they aren’t quite at Princess’s level but they’re a start and, crucially, the interior looks to be more fitting of a boat with a seven figure price tag.

Another area of the original boat that needed some attention was the flybridge, which was sparse and lacking in creature comforts. No such problems on the new one, which has a radar arch in place of the mast with a wet-bar at the bottom containing a fridge and electric BBQ grill.

Seating options are far better, too, and Hardy has sensibly made use of the enormous aft section of the flybridge by fitting a U-shaped dining area with a hi-lo table so you can transform it into a sunpad. Of course there is still space for a decent RIB and the crane to lift it with.

There have been tweaks to the helm on the top deck, too, with increased wind protection and more adjustment on the seats and steering wheel. This particular build lacks the very useful internal staircase that we found so useful on our trip from Southampton to Ipswich but Hardy would include one if you wanted it.

Motorboat & Yachting: The S-class range is expanding, with the Princess S65 due to be unveiled in the autumn, the Plymouth yard has announced.

Princess Yachts has announced a new S-class model that will be launched in the autumn, known as the Princess S65. The new arrival follows on from the launch of the S72, which was billed as a sportsbridge – as it combines the best bits of both a flybridge and sportscruiser.

The layout on the Princess S65 will include an aft galley across from the main dining area, which is connected to the cockpit by an electrically-opening aft window.

Below decks, Princess will fit four cabins and three heads compartments as standard, with a rear crew cabin offered as an optional extra. Other key features include a transom garage that can swallow up a tender measuring up to 3.3m (10’10”).

Engine options haven’t been disclosed yet, but the Princess S65 has been designed to hit a top speed of 38 knots, with a fast cruising speed of 30 knots.

It is not yet clear which autumn boat show Princess will choose for the unveiling of the S65, but all the key details will be revealed on MBY.com as soon as we get them.

Motorboat & Yachting: The owner was so taken by the golden silver colour scheme of his new Williams tender that he asked Sunseeker Spain to paint his Predator 57 to match.

We often hear of tenders being styled to match the mothership, but not the other way around. However, the owner of this 10th anniversary Williams Turbojet 325 (pictured above) was so smitten by the golden silver colour scheme that he has ordered a matching Sunseeker Predator 57.

The order was placed in January at the CWM FX London Boat Show and the golden silver Sunseeker is due completed in July and launched in time for the Barcelona Boat Show in October.

Miguel Angel Linares, managing director of Sunseeker Spain, who sold the Predator 57, said: “We get many interesting customisation requests, but I believe this is the first I have received to match a tender – they will certainly make for a very striking pair on the water.”

Based in Oxfordshire, Williams Performance Tenders was recently named as Sunseeker’s supplier of the year.

With the Aquastar 430 Aft Cockpit the Guernsey yard has entered the fray of the single-level living, wheelhouse cruisers.

And, due to the Hardy 40DS making waves at this year’s London Boat Show, the timing of Aquastar making a boat like this couldn’t be better.

Using the same hull as the existing 430 Aft Cabin means production costs are kept to a minimum and Design Unlimited could go to work on the superstructure. The enlarged windows, that are so much a part of Aquastar’s designs now, transfer nicely on to this wheelhouse outline and, all in all, it looks like a natural transition.

The aft cabin boat’s interior is gorgeous and the one on this new model is unlikely to be any different. The level of craftsmanship is top notch, especially the sumptuously lacquered woodwork.There are two cabins below decks – a double master in the bow and bunks amidships – and both share a bathroom.

The master has scissor-action berths, too, so it can quickly be made into a twin.The standard engines are twin diesels but there is the option to have a single and you can even spec a hybrid drive.

You can read more about the boat in the upcoming June issue of Motor Boat & Yachting and we expect to see the boat for the first time in September at the Southampton Boat Show.