Motorboat & Yachting: Ferretti Group has announced that the new Riva 88 Florida will get a unique convertible sunroof system. 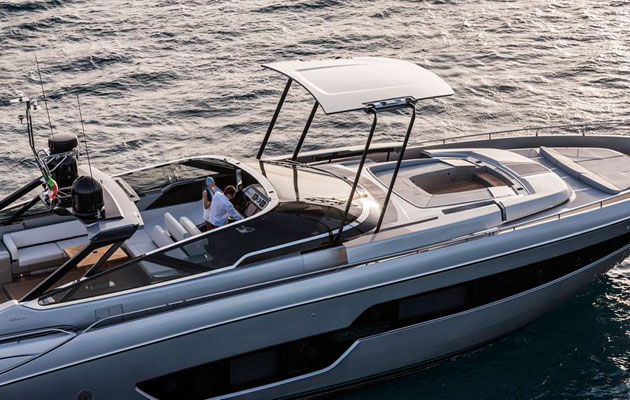 Motoryacht designers often try to merge two styles, and Ferretti Group has come up with a novel way of achieving this with the Riva 88 Florida.

The Italian yard will be fitting this new model with a Convertible Top. This patented pantograph sunroof allows the Riva 88 Florida to operate as an Open boat and a Coupe.

In open mode the hardtop is used to cover the seating area in front of the helm, but a pair of hydraulic arms can lift this panel over the saloon, resulting in the all-weather protection of a Coupe.

Sensors mounted near the moving parts ensure that there is no risk of your crew getting their hands pinched in the mechanism.

Alberto Galassi, CEO of Ferretti Group, was typically effusive, praising the Riva 88 Florida as “an unprecedented craft that turns into reality a new way of enjoying life at sea”.

The clever sunroof is not the only feature to get excited about, however, as the 88 Florida will come with a pair of MTU engines that can deliver a top speed in excess of 40 knots and a cruising range of up to 340 nautical miles.

The exterior styling ties in nicely with Officina Italiana Design‘s recent offerings, as the 88 Florida will sport a Moon Grey hull with black detailing.

Other key features include a 4-metre tender garage, which can swallow up a Williams 385 or a jetski, and four cabins below decks, each with its own en-suite.

Prices and launch dates are yet to be confirmed, but a September launch alongside the recently announced Riva 76 could well be on the cards.

Motorboat & Yachting: Princess Yachts is due to restore its first ever model, the Project 31, as part of the company’s 50th anniversary celebrations. 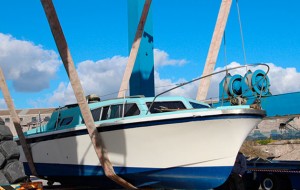 Princess is turning 50 this year and to celebrate its golden anniversary, the company has announced a very special restoration job.

Project 31, the first ever model to come out of the Plymouth yard half a century ago, is due to be renovated and given a modern Princess twist.

The original hull design spawned 150 different versions, which were sold worldwide, but the Princess team is going right back to where it all began for this historic project.

Original parts will be removed and sent to various parts in the company’s Plymouth facility, where they will be repaired and reconditioned. And the Princess Design Studio will be emulating the original design with a “nostalgic interior concept” that uses modern materials.

David King, director and founding member of Princess, said of her arrival: “I am delighted to see a Project 31 return to Plymouth after all this time. At first glance she’s in pretty good condition – although there is plenty of work to be done. We’ve got great plans for her and I’ll be delighted to see her brought back to life.”

No exhibition details or dates have been revealed yet, but the smart money is on a public display being ready in time for the September boat show season.