Pratical Boat Owner: Four people were abducted late on 21 September from the Ocean View Resort on Samal island, near Davao City, the largest city on Mindanao island in the southern Philippines. 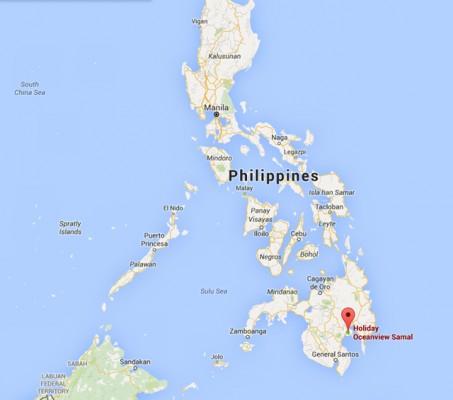 Cruising sailors’ website Noonsite has received an eye witness statement about the kidnapping that happened at Holiday Ocean View Marina on Samal island.

The four people abducted on the night of 21 September were Canadian John Ridsdel of the catamaran Aziza, Canadian Robert Hall and his Filipino partner of the yacht Renova, and the marina’s Norwegian yard manager Kjartan Sekkingstad of yacht Wiskun.

Cruiser Luc Callebaut of SY Slopemouche, who is currently berthed in  the marina, reports:

At about 23:20 on Monday night, 21 September 2015, the marina and boat yard on Samal Island, Davao, Philippines, was attacked by a group of about 10 armed and as yet unidentified men, apparently intent on taking four hostages.

It was a difficult situation with two cruisers hurt and others badly frightened by the altercations on the docks.

It appeared from the CCTV camera footage that after landing on the NE corner of the outer breakwater in two local boats, the group of armed men split up and spread out into the facility including the two marina docks.

Two cruisers that were still awake were taken from each dock. Two other cruisers that resisted were hurt, not seriously, but were not taken.

Included in those taken was the yard manager, who was responding to cries for help from the docks.

The two guards on the property were unable to respond in time to prevent the abductions. The incident was over and the group had boarded their boats and escaped with the four hostages, within about 15 minutes.

Not long afterwards, the police, military and island officials arrived and a search was initiated.  Shortly after that, the bottom of Davao Gulf was sealed off by a Navy and Coast Guard blockade, and the military had search units combing the Gulf of Davao shores for the boats.

By the following morning, mayors from all the towns on the Gulf had been contacted to be on the lookout for these boats.

The following afternoon the two boats used by the armed men were found abandoned on the Davao Gulf eastern shore and the search and tracking efforts are continuing. No positive identification of the persons involved has been made and no group has as yet claimed responsibility.

The incident has drawn the attention of the world media, and the President of the Philippines has made the recovery of the hostages one of his top priorities.  All of the Philippine military and police services are involved in the search.

During a meeting held by the marina owners on 23 September, the resident cruisers were given a briefing on the status of the investigation and the search for the hostages. Also, they were given a description of the substantial planned security improvements for the facilities, including a possible permanent military contingent, all to be supervised by a new staff security manager.

Because of the absence of the yard manager, temporary yard and marina managers will be appointed in the near future so that the facilities can remain open for business.

In summary, the Holiday Ocean View Marina and yard facilities here on Samal Island remain intact and will continue business as usual.  In view of the unexpected incident, the security will be greatly improved with facility upgrades and  additional guards and training.

None of the 50-plus boats currently in the marina have plans to leave because of this incident.  The location of the marina south of the NW Pacific typhoon zone and the quality of facilities and surrounding area are considered too good to move elsewhere.

For anyone reading this that had plans to come to the marina in the next few months, they should contact the marina at Info@HolidayOceanViewMarina.com in order to confirm their intentions.