Motorboat & Yachting: Sunseeker has revealed the first images of the Sunseeker 131 superyacht, which is due to be launched in early 2016. 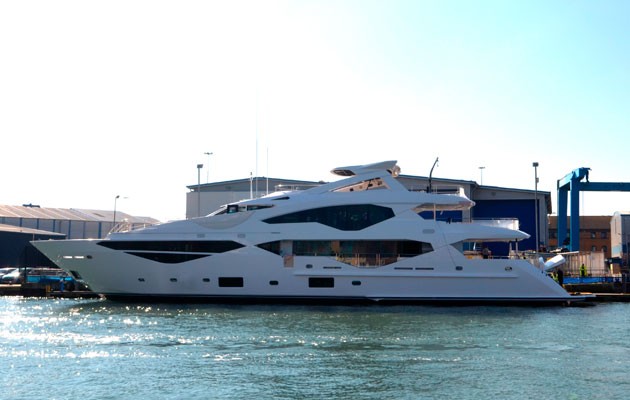 The first images of the Sunseeker 131 superyacht have been revealed, with the Poole-based yard taking a bold approach to exterior design.

The dramatic cutaway bulwarks may divide opinion, but Sunseeker has already sold four hulls ahead of its 2016 launch.

After one year in development and construction, the completed Hull #1 will now go into extensive testing and sea trials prior to the first owners taking delivery.

Sunseeker estimates that the tri-deck 131 will have a top speed of 23 knots and an optimum cruising speed of 12 knots.

The interior is every inch as opulent as you would expect from a Sunseeker superyacht, with the yard’s bespoke service meaning that fabrics, furniture and even layout are up for discussion.

On this particular model, the owner has gone for a light colour scheme with plenty of mirrored surfaces.

Sunseeker recently celebrated its 100th hull over 100ft and with the official launch of the Sunseeker 131 edging ever closer the British boatbuilder is showing no signs of slowing down any time soon.