Practical Boat Owner: An explosion and fire aboard a small sports boat on the Hamble River created a ‘huge plume’ of smoke that could be seen for miles around. 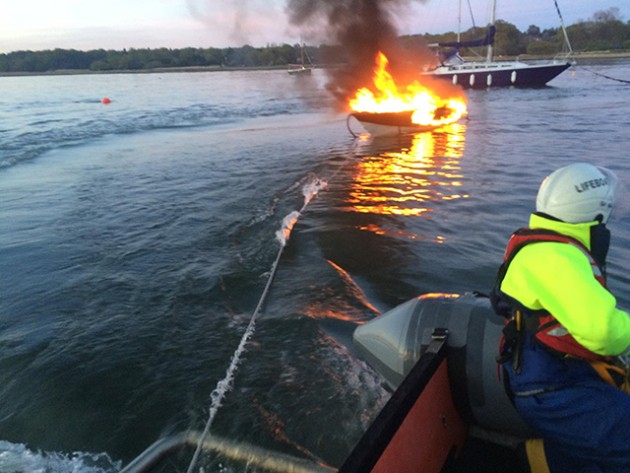 Hamble lifeboat, on exercise at the time of the explosion yesterday evening, were quickly on the scene and extinguished the fire out and towed the sports boat ashore. No one was injured.

A huge plume could be seen from Hythe on the other side of Southampton Water.

A spokesman for Hamble Lifeboat said a ‘large explosion’ was seen and heard by the Hamble Lifeboat crew at around 8.30pm yesterday evening, whilst conducting training for the evening.

The lifeboat was on scene within a couple of minutes and found the vessel ‘completely on fire’.

The spokesman said: ‘It was quickly established that there was only one person involved and he was safe and well away from the vessel.

‘The vessel on fire then drifted away from the pontoon and due to the flood tide went upstream. The lifeboat was able to safely attach a line and get the vessel away from other yachts and craft moored on the river.

‘Once under tow, the lifeboat crew were able to use their pump to extinguish the fire whilst they brought it to the slipway, where the fire crews from Hightown Fire Station were waiting.

‘Once it was established that there was no further danger and everything was safe, the fire crews and the lifeboat returned to their stations. Hill Head CRT and Hamble Harbour Master also attended.’