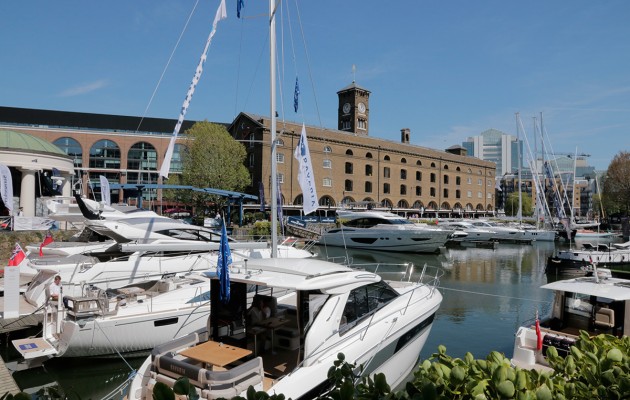 London’s newest boat show has gone from strength to strength, with sunny conditions, an impressive line-up of exhibitors and a steady flow of visitors.

A total of 6,500 visitors attended each event according to the organisers, marking an 8% increase on the 2015 event.

David Suchet (pictured right) was the special guest on day one of the show, cutting the ribbon at Old Billingsgate Market.

The Poirot actor attended last year’s inaugural event and bought an XO270 from Wessex Marine. This year he returned with his wife Sheila to add a touch of stardust to proceedings, and their 300hp motorboat went on display in the St Katharine Docks area of the show.

“I think it’s important for the industry that it’s here, it’s in a wonderful part of London,” he said. “It’s really upmarket toys for boys and girls.”

Sunseeker made their first appearance at the on-water section of the show, with the award-winning Predator 57 and 68 Sport Yacht both available for viewing.

William Burns, brokerage director at Sunseeker London, said: “We heard good things from last year, it’s a good place to have the boats and the weather came out as well, so it makes perfect sense.

“This is a smaller show, but you can be more intimate with clients, have private viewings, it’s just a more relaxed atmosphere and it’s broadening our audience as well.”

Fairline Yachts was also strongly represented, with a Targa 38 and Squadron 42 on display through brokers Bates Wharf and Burton Waters.

Princess Motor Yacht Sales once again brought the largest vessel to the show in the form of the S72, while the deck saloon version of the V58 made its public debut.

Glider Yachts looked to be one of the biggest talking points of the show, with the radical SS18 set to be unveiled at the show.

However, technical difficulties with the support vessel hampered its journey up from Burgess Marine and after missing the deadline for loading into St Katharine Docks, the new firm had to make do without its showpiece prototype.

Instead, managing director Rob McCall was on hand to answer questions about the project. “The quality of enquiries really exceeded our expectations – this show was the perfect way to introduce our exciting new product to the discerning yacht buyer,” he said.

He added that the vessel will make its public debut in September at this year’s Monaco Yacht Show.

Spirit Yachts also increased their presence this year, with a P40 Coupe moored up alongside Soufriere, the Spirit 54 that was used to film 2006 James Bond film Casino Royale.

Nigel Stuart, managing director of Spirit Yachts, said: “This show has huge potential, because it attracts people from the centre of London and we are able to show them what we make.

“By bringing two boats to the water this year, they can come and see us, touch us, feel us, and that’s what we’re really about.

“It’s a great opportunity to show the market what we’ve got. The location is right in the centre of London, so they can come out of their offices and come and see the boats.”

Whilst some of these models were used boats, a planned brokerage section in conjunction with YachtWorld failed to materialise, as exhibitors prioritised the promotion of new models.

Camper & Nicholsons Marinas used the event to explain more details of its refurbishment of St Katharine Docks. The project is expected to take less than nine months and will include replacing all of the pontoons.

Over at Old Billingsgate Market, all of the largest names in the superyacht world were represented with indoor stands and scale models. These included Azimut-Benetti, Lurssen, Blohm + Voss and Amels.

There was also a strong presence from the luxury goods brands, with Goldfinch displaying its Sygnet superyacht piano and Ulysse Nardin once again a key sponsor.

The 2017 London Yacht, Jet & Prestige Car Show will take place in July, with exact dates to be confirmed.