Practical Boat Owner: A solo sailor called for RNLI assistance twice in 24 hours after his yacht became grounded on the rocks and when he managed to refloat, a damaged propeller left him drifting helplessly towards Yarmouth Pier. 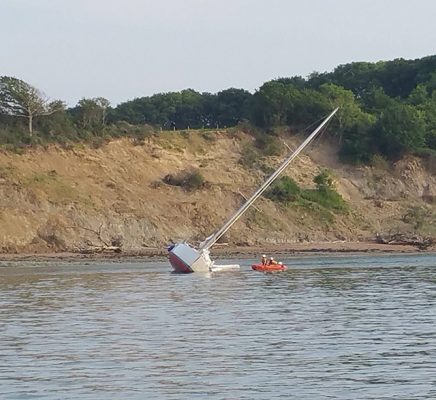 Yarmouth RNLI lifeboat was first called out to assist the 56ft yacht Wallybird II, on the evening of 9 June.

The single-handed skipper, had run aground on Hamstead Ledge rocks in the western Solent during Friday afternoon.

As the tide dropped, the yacht heeled over steeply with the result that the skipper could not deploy his anchor in preparation for refloating.

He called for assistance at 6.30pm and the lifeboat went to his aid. The small rigid inflatable Y boat (RIB) was launched and deployed the anchor for him. It was estimated that he would refloat around 1.30am.

At 3.30am on Saturday morning, the lifeboat was called again to Wallybird II.

Although the skipper had managed to pull himself clear of the rocks as his yacht floated, it was only then that he discovered that his propeller had been damaged and he was unable to manoeuvre.

There was little or no wind so he was also unable to sail and was drifting helplessly towards Yarmouth Pier. The lifeboat reached him just before 4am and took him in tow into Yarmouth where he arrived safely at 4.30am.