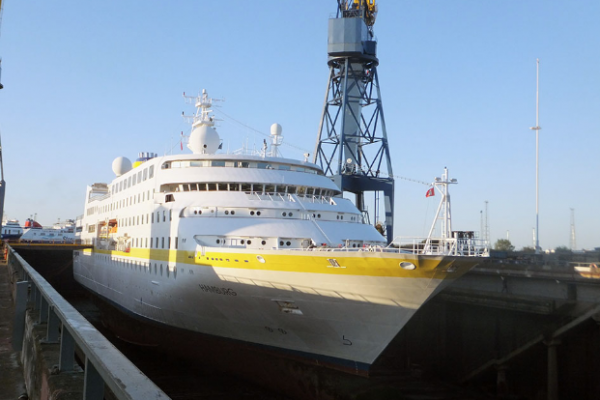 The cruise ship, Hamburg was carrying 461 people when it ran aground on chartered rocks in the Sound of Mull, Scotland on 11 May, 2015.

The vessel was trying to enter Tobermory Bay when the accident happened. No-one was injured, but the Hamburg needed three months in dry docks for repairs.

The investigation by the Marine Accident Investigation Branch (MAIB) found that having been unable to enter Tobermory Bay on arrival, the Hamburg’s passage plan was not re-evaluated or amended.

“Combined with poor bridge team management and navigational practices, this resulted in the vessel running into danger and grounding,” said the MAIB report.

The Hamburg could not enter Tobermory Bay as there were already two other cruise liners. The investigation also found irregularities in the crew’s response to the accident.

“Despite the loud noise and vibration resulting from the grounding, the bridge
team did not initiate the post-grounding checklist, no musters were held and neither the
vessel’s managers nor any shore authorities were notified of the accident,” stated the report.

Despite no “appropriate post-grounding actions” being taken, the Hamburg proceeded to Tobermory Bay. Here, an “ill-considered and poorly executed attempt” was made to anchor the cruise ship.

This was before a full assessment of the damage had been conducted and before “any of the port, coastal state or company” had been informed of the accident.

“This (attempt to anchor) had to be aborted to avoid a second grounding when Hamburg dragged its anchor,” said the report.

The passenger vessel was then taken back out to the open sea with unknown damage to its structure. It diverted to Belfast where a dive survey revealed the extent of the damage.

This included a cropped port propeller and damage to the hull plating on the port side and the bottom of the cruise ship.

The MAIB found the decision to sail for Belfast “without first developing a plan with the vessel’s senior officers, technical managers and the relevant authorities ashore” was “inappropriate and incurred additional unnecessary risks”.

The report also stated that the 58-year-old master of the Hamburg, Captain Joao Manuel Fernandes Simoes “did not demand a high standard of navigational practices from his officers which resulted in a weak practices amongst the bridge team”.

Simoes was subsequently prosecuted by the Maritime and Coastguard Agency for the failure of passage plan under SOLAS and failure to report an accident contrary to the Merchant Shipping (Accident Reporting and Investigation) Regulations 2012.

He pleaded guilty and was fined a total of £813.

The operators of the Bahamas-registered Hamburg, V-Ships, conducted its own investigation into the groundings. As a result, it has increased training and reviewed its navigational practices, emergency contingency plan grounding checklist and passage planning.

The MAIB noted that all parties to the incident had taken appropriate action, and it did not need to make any recommendations.