Yachting Boating World: The long awaited expansion of the Panama Canal has now opened. Thousands of people watched the first ship make its inaugural trip along the waterway. 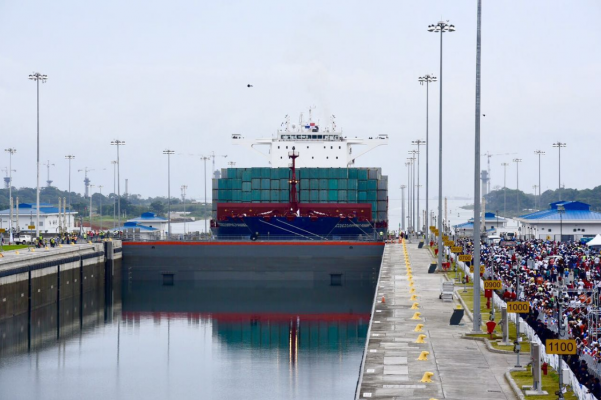 The first ship, a Chinese container vessel, has sailed through the newly expanded Panama Canal.

Thousands turned out to see the Cosco Shipping Panama began its eight hour inaugural journey from the Atlantic to the Pacific on 26 June.

The expansion will double the capacity of the Panama Canal.

Speaking at the unveiling, the President of Panama, Juan Carlos said: “This is a great day, a day of national unity and a day for Panama. This is the route that unites the world, the Panama Canal.”

Work on the expansion project to broaden the canal started in 2007 and is reported to have cost US$5.5 billion.

It allows a new generation of larger ships – Neopanamax class vessels – to use the waterway.

It is hoped it will also increase the competitiveness of the shipping route, with liquefied natural gas (LNG) tankers now able to use the Panama Canal for the first time.

Commentators also believe it could change how goods are imported into the United States, one of the most frequent users of the canal.

Some are predicting that business will now be diverted way from Los Angeles and Long Beach – some of the USA’s busiest ports. Instead, more ships are expected to dock on the East and Gulf coasts.

Concern has also been raised about the economic slowdown in China – the second largest customer for the canal.

A drop in oil prices has also impacted on global shipping.