Yachting Boating World: Alchemist, the yacht belonging to the commodore of the Island Sailing Club, sank during the Round the Island Race on 2 July after hitting a shipwreck.

But it was good news for TP52 Gladiator who won the race and MOD70 Phaedo 3 who smashed the multihall record time. 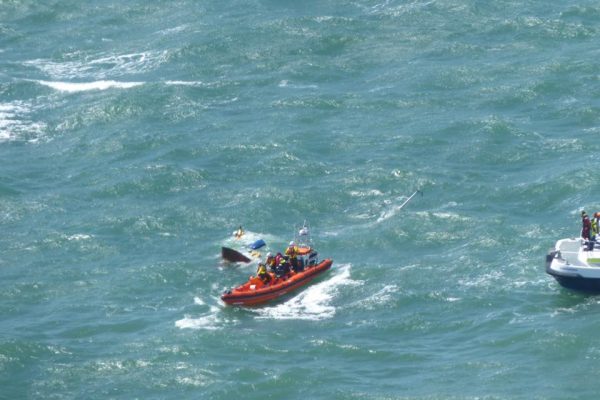 Dramatic footage of the sinking of the Alchemist during the Round the Island Race has been released.

It was shot by a crew member of RNLI Mudeford, which rescued the crew just seconds before the yacht sank.

It started taking on water after hitting the shipwreck of the SS Varbassi just east of The Needles on the Isle of Wight. The vessel was competing in the Round the Island Race on 2 July.

4 July
The Dubois half-tonner, Alchemist, sank in 17 metres of water just east of The Needles, Isle of Wight on 2 July.

The yacht hit the wreck of the SS Varvassi while competing in the Round the Island Yacht Race.

The Junior Offshore Group (JOG) racer belongs to the commodore of the Island Sailing Club, Mark Wynter. He was not on board at the time, and none of the crew were injured in the incident.

The Yarmouth RNLI all weather lifeboat, the Mudeford RNLI inshore lifeboat and The Needles coastguard rescue team all responded to the incident.

Strong winds during the racing, especially south of the Isle of Wight, meant challenging conditions for many taking part. Racing for some of the smaller classes of yacht was cancelled.

The Yarmouth lifeboat was called to six incidents during day, including the loss of a mast, damaged rudder, crew injuries and damaged hulls.

The sinking of the Alchemist has been reported to the Maritime and Coastguard Agency. Pollution was minimal because the yacht had little diesel onboard.

Meanwhile a yachtsman was taken to hospital on 1 July after being knocked unconscious while practicing for the Round the Island Race.

The man, who is in his 30s, suffered serious head injuries when he was thrown onto a winch handle. He was on board a 40 foot Sunsail ocean racer.

Cowes RNLI took the man to shore where he was taken to St Mary’s Hospital. Despite the challenging conditions, race organisers say that only a small percentage of the fleet retired from the race.

The overwhelming majority of competitors – some of whom saw gusts to almost 40 knots – successfully completed the course.

The winners of the prestigious Gold Roman Bowl for the first IRC boat on corrected time was Bernard Langley’s TP52 Gladiator.

The crew completed the course in less than four and a half hours from Gladiator’s start, beating Sir Keith Mills’ FAST 40+ Invictus, which had Prince Harry on board as crew.

Gladiator’s owner, Tony Langley, is currently racing his other TP52 in Porto Cervo, Sardinia, but his three children, Tom, Charlotte and Bernard, who helmed, all took part in the race.

“It was a windy and rough race,” said boat captain Brett Aarons, “especially in the overfalls off St Catherine’s and Dunnose. It was very wet, both on deck and below.”

Nevertheless the team never held back, hoisting the A3 spinnaker at the Needles, before peeling to the A4 at St Catherine’s Point and hitting speeds of 20-24 knots.

“At that point we knew that we had a chance of a good result,” stated Aarons.

“At that kind of speed, the adverse tide only slows you by a small percentage. Once we were back in the eastern Solent we were still in the last of the west-going favourable tide and were almost able to lay the finish line in one tack – it was a huge advantage,” he concluded.

In doing so he smashed the record time Sir Ben Ainslie set in 2013 by a stunning 28 minutes.

Speaking after crossing the line, Thornburg said: “We’re over the moon, the team work on board was fantastic and it was just on the edge where we could keep the full main up, so the boat was totally powered up.”

The largest monohull in the fleet, Mike Leopard’s 100ft Leopard, took monohull line honours, but failed to beat the record time he set in 2013 by 13 minutes.

When asked for his take on this 80th race in its 85th Anniversary year, ISC Sailing Flag and head of the ISC Race Management team, Dave Atkinson, acknowledged the challenges.

“The heavy weather forced us into making some pretty major decisions in cancelling some classes but we feel that with safety always being paramount, we were entirely justified in doing what we did,” he said.

“There are a few sad faces but many more happy ones. We act as we do with the information that we have and at the end of the day I think it has been an incredibly successful weekend,” concluded Atkinson.