Practical Boat Owner: A couple abandoned their blazing yacht after an engine fire broke out near the entrance to Poole Harbour. 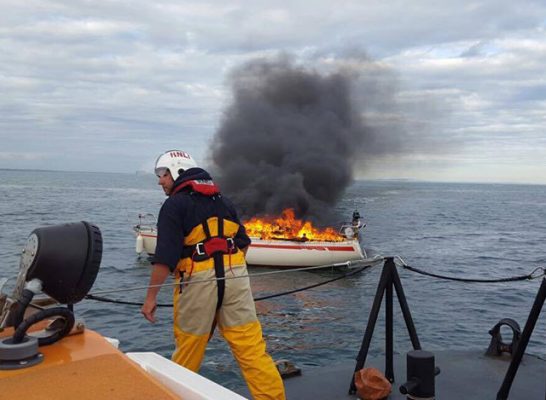 The ‘Mayday Mayday Mayday’ call was made from the 31ft yacht just after 6.30pm on Saturday, first reporting that smoke was coming from its engine room.

The caller then alerted the coastguard that he ‘could see flames and that they were ‘abandoning ship’.

The UK Coastguard also received multiple 999 calls from other vessels and members of the public in the area that could see the black smoke billowing from the yacht, which was in the Swash Channel, approximately 100 metres outside the entrance of Poole Harbour.

The yacht, with a man and woman on board, had been en route to Old Harry rocks at the time of the fire.

A nearby pleasure cruiser and several other vessels, including Condor ferry which launched its rescue boat, responded to the emergency broadcast and made their way to the burning vessel to assist the crew.

The 25ft pleasure cruiser recovered the two crew and transferred them to the Poole RNLI lifeboat.

Poole Lifeboat volunteers, who had been washing mud from the lifeboat and equipment back at the station, following two earlier shouts, sprang into action when the Mayday call came in.

At 18.40pm both lifeboats launched, Poole Inshore lifeboat was on scene within eight minutes and found that the couple had been picked up by a passing motor boat and were safe and well.

There were a lot of vessels in the vicinity so the lifeboat crew moved boats away, cordoning off the area around the burning yacht. They transferred the casualties from the motorboat to the lifeboat and assessed the situation, establishing how much fuel was on-board and if there were any gas bottles or anything else inflammable.

The all-weather lifeboat arrived and was preparing its salvage pump and fire hose, the crew began to douse the fire down, the yacht was drifting north east.

The inshore lifeboat stood by as a guard vessel. The casualties on board were transferred onto the Vanguard, the pilot boat, who took them back to Poole Yacht Club.