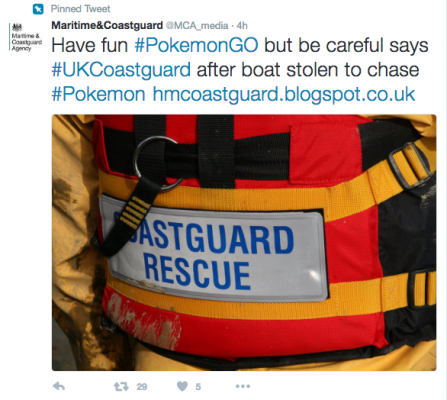 The UK Coastguard was called out to investigate after reports that a group of young people had taken a rowing boat without permission to chase a Pokémon.

The incident happened at New Brighton marine lake in the early hours of 19 July.

Wirral Coastguard Rescue Team and the Merseyside Fire and Rescue Service both responded to the incident.

When the crews arrived at the scene, they found the youths had already left. The young people had left the rowing boat drifting in the middle of the marina.

Now the Maritime and Coastguard Agency (MCA) has issued a warning to youngsters, reminding them to use their common sense while playing the popular mobile phone game.

Senior coastal operations officer, Danny Jamson, said: “We know that many people are enjoying Pokémon GO across the UK and we wouldn’t want to spoil that fun.”

“However, we would ask people to use a little common sense and not to take risks while looking for Pokémon,” he stressed.

“The incident this morning shows that risk taking can put not only you in danger but also the rescue services who have to come to your aid,” said Jamson.

The MCA has taken to the social media sites, Twitter and Facebook, to highlight their safety message.