Yachting Boating World: An investigation is now underway after a boat exploded in a marina in Ibiza, leaving two people in a critical condition in hospital. 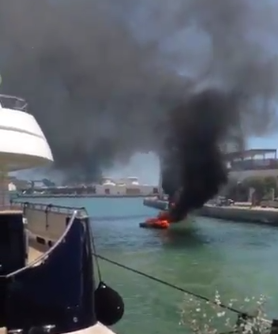 The Ports De Balears in Ibiza are investigating to try and find out why a small boat exploded into flames at Marina Ibiza.

Five people were on board at the time on the incident on 24 July.

According to witnesses, the 23-foot boat had just refuelled when the explosion happened.

A  woman is reported to have suffered burns to 90 per cent of her body, while a 36-year-old man has 80 per cent burns. Both are receiving treatment at a specialist burns unit in Valencia.

Another man suffered a burnt arm and two other people were treated for smoke inhalation.

A jet-ski was also engulfed in flames when the explosion happened. Firefighters were called and put out the blaze.

The Ports de Balears has opened an investigation to find out the cause of the explosion.

All the victims are believed to have come from Valencia.