Yachting Boating World: Whitstable and Margate RNLI lifeboats were launched jointly to rescue ten fishermen and save their boat from sinking off the north Kent coast. 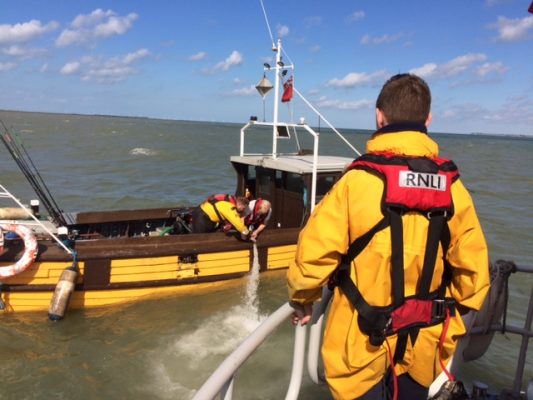 On Sunday 7 August coastguards received a call from a charter angling boat reporting that they were taking in water and in danger of sinking in the River Swale. There were ten people on board the boat.

Margate’s all-weather lifeboat and Whitstable’s inshore lifeboat were both attending the annual Whitstable Regatta when the mayday call was received.

Whitstable’s inshore lifeboat arrived quickly at the scene to provide lifesaving assistance. As the ingress of water on the boat could not be controlled Margate’s all-weather lifeboat provided assistance with their portable salvage pump. The fishing boat crew were taken safely ashore at Harty of the Isle of Sheppey by Whitstable lifeboat.

The fishing boat could be saved and was towed by Margate lifeboat to the entrance of Faversham Creek. The Whitstable lifeboat was able to beach it safely at Hollowshore.

Paul Hodson, Lifeboat Operation Manager, Margate Lifeboat said: “This joint operation demonstrates the importance of having a balanced mix of various lifeboats covering the north Kent coast. Without the rapid response of Whitstable’s inshore lifeboat and the additional capabilities of Margate’s larger all-weather lifeboat the outcome to this story could have been very different”.