Yachting Boating World: A fisherman has been rescued by the Summerleaze RNLI lifeguards after his boat caught fire off the coast of Bude in Cornwall. 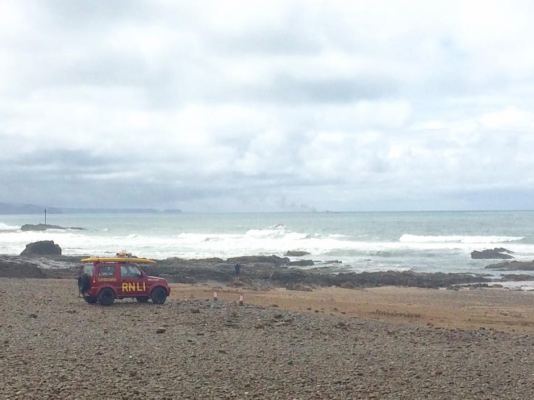 A fisherman was forced to jump into the sea after his boat caught fire off the coast of Bude in Cornwall.

The man was wearing a life jacket and was picked up by lifeguards with Summerleaze RNLI. The rescue happened just after 12pm on 10 August.

The UK Coastguard said it had received multiple 999 calls from members of the public reporting the boat fire.

It immediately issued a Mayday relay broadcast requesting assistance from other vessels in the area.

Summerleaze RNLI lifeguards raced out to sea on a jet ski to pick up the fisherman.

He was transferred to a nearby fishing vessel and was brought to shore where he was met by the Bude Coastguard Rescue Team. Cornwall Fire Service were also on scene.

The fisherman required no medical assistance. Bude and Padstow RNLI lifeboats were also sent to the burning vessel to monitor the situation. The 6.3 metre boat is now reported to have sunk.

The duty controller for UK Coastguard, James Instance, said: “This fisherman was wearing a life jacket, which no doubt aided his survival and enabled the lifeguards to find him quickly.”

“By taking this simple safety precaution, it meant that when he fell into the water his survival time increased significantly. He was also able to raise the alarm on the VHF radio,” noted Instance.

He urged anyone going out on the water to “take a good method of communications”.

“On a boat a VHF DSC radio is ideal, and a mobile phone in a sealed plastic bag is a good back up. Call 999 and ask for the Coastguard in an emergency at sea,” advised Instance.

“And of course wear your life jacket. This could have been a very different outcome today had he not been wearing a life jacket and we commend his actions, which have assisted in saving his life,” stressed the duty controller.