Yachting Boating World: A man is being treated in hospital following a fire on a barge at Castlefield in Manchester. He is understood to have jumped into the canal to escape the flames. 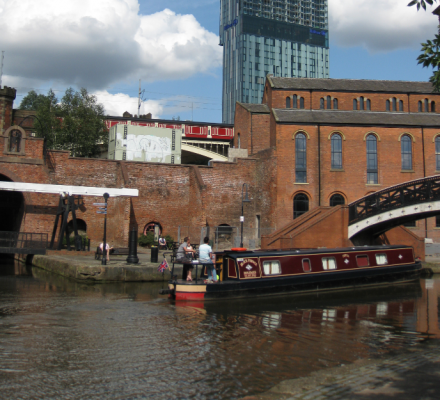 A man has suffered burns to his legs and arms following a fire on a barge at Castlefield, Manchester.

Firefighters from the Greater Manchester Fire and Rescue Service were called to Castle Quay at 10.44am on 14 August, following reports of an engine fire.

Fire engines from Moss Side, Salford and Eccles, along with the fire service boat from Eccles, attended the incident.

The fire was out on arrival, but one man was given first aid before the ambulance service took him to hospital.

The man was working on the vessel’s engine when it caught fire.

He was forced to jump into the canal.

A spokesman from the Greater Manchester Fire and Rescue Service said officers were on the scene for an hour.

The man suffered 10 per cent burns to his legs and arms.