Sailor loses wife’s ashes when boat goes up in flames

Yachting Boating World: Timothy Lenz was living on board the boat when it caught fire off the coast of Saco, Maine. His wife’s ashes were on board when the vessel sank. 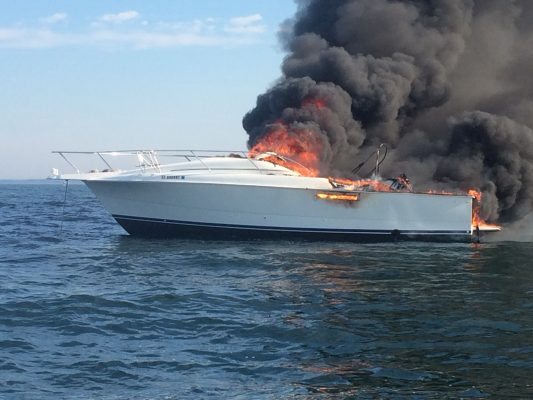 Timothy Lenz had kept his wife’s ashes on board his motorboat every since he moved onto the vessel.

The retired veteran, who lives alone, was on a trip to Connecticut when the engine compartment caught fire near Wood Island, Maine.

Lenz told the television station, WMTW that he tried to put out the flames with a fire extinguisher, but the smoke was too thick.

He took the decision to abandon his 31-foot motorboat, leaving behind his wife’s ashes. He was rowing away from the boat in his skiff when he was later picked up by a passing fisherman, who alerted the authorities.

A spokesman for the Maine Marine Patrol said: “The vessel was fully engulfed when Marine Patrol arrived and was eventually extinguished by local Fire Department personnel. Marine Patrol transported Mr. Lenz to Camp Ellis where he was evaluated and released by local EMS.”

“Marine Patrol reports that Mr. Lenz’s boat sank as a result of the fire. No plans have been reported yet to recover the vessel,” concluded the spokesman.

Lenz said he has lost most of his valuables in the fire and subsequent sinking. But, he is trying to remain positive.

“If I had stepped into the boat any deeper with that black smoke, I probably wouldn’t have come back out. They probably would’ve found me,” Lenz told WMTW.

He said he is very grateful to the passing fisherman who came to his aid: “I’m just glad that a fisherman come by, saw me, because I was in the little dingy rowing away as fast as I could,” Lenz said.

An investigation is now underway to find out the exact cause of the fire.