Yachting Boating World: The three sailors were rowing back to their yachts when they were swamped by a wave in the Barmouth channel, Wales. They were found several hours later. 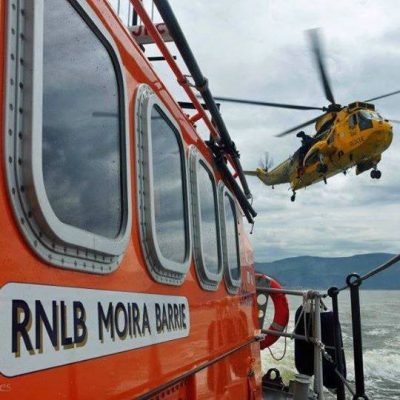 They had arrived earlier on 6 July in their respective boats – a 30-foot Etap yacht, Miss Millie, and Yacht Dido. Both were moored in Barmouth harbour.

The three men had been returning to their vessels when they were swamped by a wave. Their dinghy capsized in the main channel.

A Barmouth RNLI spokesman said: “With the strong ebb tide flowing at 4 to 5 knots, they were soon swept out to sea.”

Both the Barmouth RNLI Inshore Lifeboat and the All-weather lifeboat were launched to search for the sailors.

The rescue was co-ordinated by HM Coastguard, who initially alerted the RNLI volunteers at around 1am.

A HM Coastguard Search and Rescue helicopter was also involved in the search.

The three men were eventually located at 03.07 by the Barmouth All-weather lifeboat, Moira Barrie.

The sailors had drifted a considerable distance out over the bar and into the bay.

“The men had managed to right the dinghy but it was swamped with water, they were very cold and shocked. None of them were wearing lifejackets,” noted the Barmouth RNLI spokesman.

The sailors were brought ashore to the lifeboat house, where they were able to shower and warm-up before being returned safely to their yachts.

The men returned to the lifeboat house later that day to thank the crew.

“We were rowing out towards our boat and were in the main channel when a wave hit us and we capsized,” the men told the RNLI volunteers.

“We hadn’t realised how strong the tide was and were soon swept out, but managed to hang on to the boat. We were in the water for some time before we saw the lifeboat’s searchlights and heard the helicopter,” they continued.

“We are very grateful to the crew, they were brilliant. We will be going back to Ireland tomorrow,” the men stated.