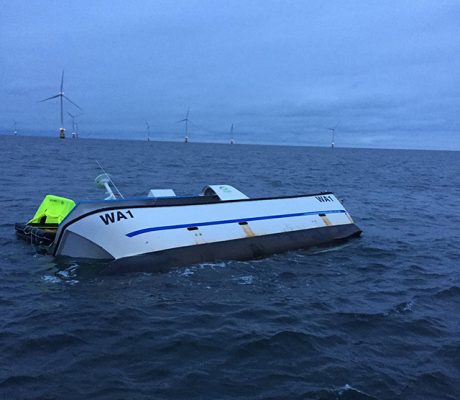 The request to launch the lifeboat came from Holyhead Coastguard at 2.50am, following a report that a 10.5 metre-long catamaran had collided with an offshore wind farm turbine, and was taking on water.

The three crew on board had deployed their liferaft and were preparing to abandon the vessel when the lifeboat reached them.

One of the crew, a 58-year-old man, sustained a head injury as a result of the collision, which occurred while the catamaran was on passage from Ravenglass.

The lifeboat crew reached the stricken vessel at 3.20am. Seven minutes later all three fishing boat crew had been transferred safely onto the lifeboat.

A search and rescue helicopter also scrambled, however, once the lifeboat had manoeuvred clear of the windfarm site and after a further assessment it was decided to return the casualty to the lifeboat station and the helicopter was stood down.The lifeboat returned to the station at 3.56am and by 4.07am the casualty was being transported by ambulance to Furness General Hospital.

The lifeboat was then re-launched and returned to the fishing vessel. The lifeboat volunteers found the catamaran to be very low in the water on the starboard side.

At 5am the lifeboat had the vessel under tow although it was still taking on water.

John Falvey, Barrow Lifeboat operations manager, said ‘The vessel was listing badly when the lifeboat arrived having taken on sea water. The crew were about to abandon the vessel but we transferred them safely to the lifeboat which then took them to Barrow Lifeboat Station so that the injured skipper could be treated at hospital. The lifeboat then returned to deal with the damaged vessel which was in danger of sinking.’

The vessel was taken under tow and ‘very slowly and carefully moved closer to the west side of Walney Island where it was anchored so as not to be a hazard to other shipping in the area’.