Motorboat & Yachting: The organisers of the London Boat Show have announced that the Sunseeker stand will be revamped and repositioned for 2016. 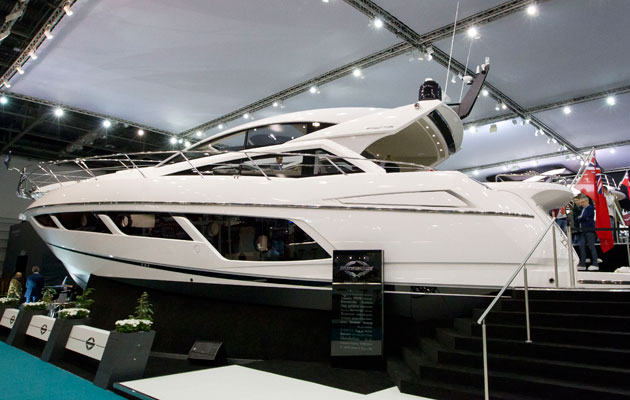 The Sunseeker stand is always one of the big draws for visitors to the London Boat Show, with celebrity appearances and luxury yachts on display.

However, the 2016 London Boat Show will feature a different layout, with the Sunseeker stand shifted from the centre of the Excel Centre’s South Hall to run horizontally along the perimeter of the hall.

Organisers British Marine Boat Shows say that this move will open up the show further, while keeping the Sunseeker stand in the eye-line of the entrance.

Murray Ellis, managing director at British Marine Boat Shows, said: “Next year upon entering the Show, visitors will be able to view the whole scope of the event with the Sunseeker International stand in eye line view.”

Sunseeker fans will be hoping for a brand new model launch at the 2016 London Boat Show, after the Poole-based yard decided against unveiling any new arrivals at any of the major autumn 2015 boat shows.

The 95 Yacht, 116 Yacht and 131 Yacht are all currently under development, and they are all longer than the Sunseeker 28M, which was the largest boat on display at the 2015 London Boat Show.

Sean Robertson, sales director at Sunseeker International, added: “We are delighted to have been involved in shaping the future of the event and look forward to unveiling our stand in its prominent new position.”

The 2016 London Boat Show will run from January 8-17 and advance tickets are on sale now, with prices starting at £10 per adult.