Yachting Boating World: Pendennis Shipyard says Aquila is the largest yacht yet to be refitted in the UK. It took one year. Explore pictures of the refitted motor yacht below. 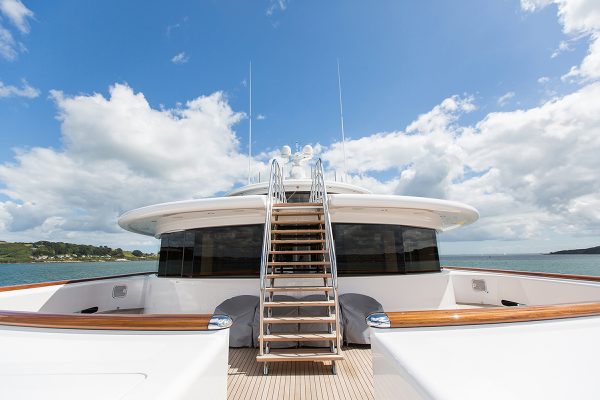 Pendennis Shipyard in Falmouth, Cornwall has announced its finished the extensive refit of the 85.6 metre, Aquila. The work on the motor yacht’s five decks took one year to complete. At its peak, it involved more than 1,000 craftsmen and women.

Aquila now has a completed refigured owner’s deck, and a technology upgrade, which included the rebuilding of four generators.

Pendennis says Aquila is the largest yacht yet to be refitted in the UK.

Burgess was appointed as yacht management, supporting the owners throughout the project from concept to re-delivery.

Fleet technical manager at Burgess, Adrian Tinkler, said: “To facilitate the extent of design and technical changes required, the interiors on Aquila needed to be stripped back to bulkheads across most areas.”

“The team completely updated the social spaces, modernised technical systems and lighting, and restyled the boat across an area of over 750 square metres, the scale of which was unprecedented by any of the suppliers in such a short time period,” he continued.

“Thanks to efficient planning and collaboration between the many hundreds of people involved at each stage of the design, specification and execution phases, the team delivered on time, a truly remarkable rebirth of this beautiful yacht,” added Tinkler.

Technology upgrades as part of the yacht’s five-year survey included a new AV and IT system, radar equipment, air conditioning and fresh air handling systems, along with the rebuild of the four generators.

Redman Whiteley Dixon (RWD) and Susan Young Interiors were commissioned to evaluate the existing room and exterior layouts to reformulate spaces and improve flow between each area of the yacht.

Significant enhancements included reconfiguring the owner’s suite along with the addition of a 60 square metre private deck area.

The Jacuzzi was repositioned to the forward sun deck, and a cinema was integrated into the main salon.