Motorboat & Yachting: Thames charter company Hobbs of Henley has launched a self-drive tour of some of the key filming locations used in Midsomer Murders. 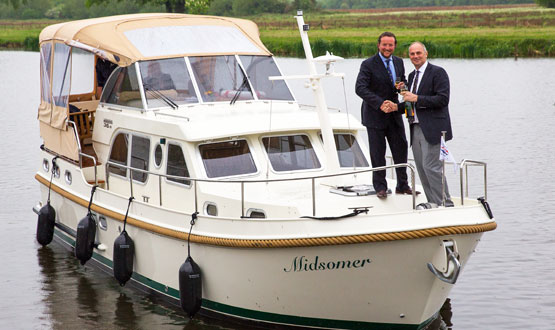 Midsomer is a Linssen Grand Sturdy 36.9 and will now become the largest self-drive model in the Henley charter company’s fleet.

Sir Steve, who made a cameo appearance in a 2004 episode of Midsomer Murders as an Olympic talent scout, was on hand to pour champagne over the bow at the launch event earlier this week (May 19).

“It is a privilege to help Hobbs of Henley launch this new luxury vessel,” he added. “For years I trained on this Henley reach in pursuit of my five Olympic golds, and dealing with the wash created on the water by the Hobbs Fleet made me a better oarsman!”

The Hobbs of Henley ‘Midsomer by Boat’ river trail is a one-week charter itinerary that takes in key filming locations from the popular murder mystery TV series, such as Mapledurham Estate, the Saxon town of Wallingford and the quaint village of Sonning.

Hobbs of Henley has been Linssen Yachts’ exclusive UK charterer since 2013 and their self-drive fleet also includes Jacqueline, a Linssen Grand Sturdy 34.9.