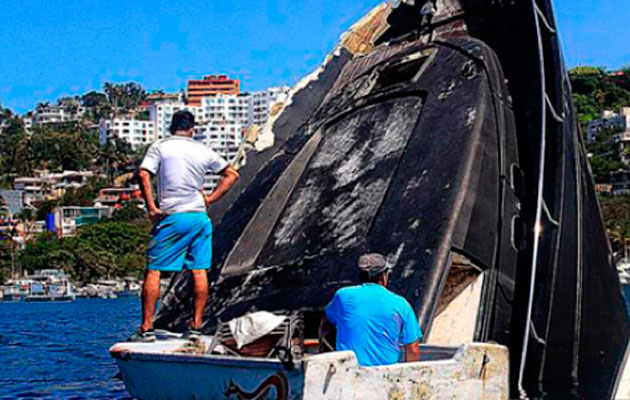 Hurricane season has well and truly kicked off in Latin America, with the Mexican coastal resort town of Acapulco being battered by high winds of 90mph and torrential rain last week during Hurricane Carlos.

And it turns out that one of the victims is a stealthy, black motoryacht belonging to local politician and TV personality Jorge Kahwagi.

As this dramatic footage shows, Mr Kahwagi’s vessel was moored without any storm lines, making it easy prey for Hurricane Carlos when it hit on Sunday June 14th 2015.

In the video, a brave deckhand can be seen struggling to remedy the situation by putting out extra fenders, despite the surging waves lapping over the pontoon.

Local news provider Diario del Morelos reports that the vessel, which is believed to be worth 11m Pesos (£450,000), did not survive Hurricane Carlos.

In a photo posted to Twitter, the newspaper showed the storm-ravaged bow of the motor yacht as it was being salvaged on Friday June 19th 2015.