Posted on December 4, 2015 by Velos Insurance

Motorboat & Yachting: The Ferretti Group has revealed details of its upcoming Pershing 140 superyacht, which will be the first of the range to be built from aluminium. 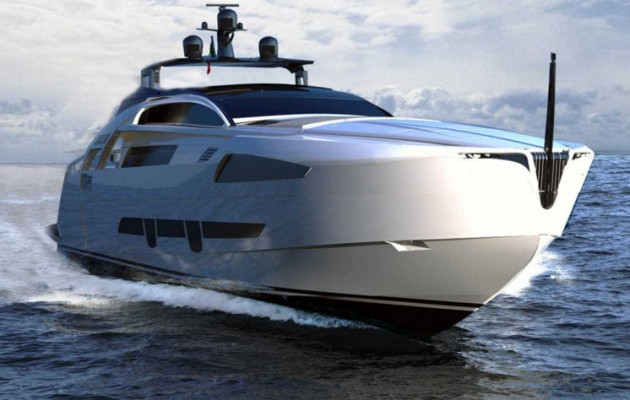 Following on from the Monaco Yacht Show announcement that it would be building a 140ft Pershing, the Ferretti Group has given more details on its latest superyacht project.

Due to be launched in 2018, the Pershing 140 will be built from aluminium – the first model in this range to use such a material.

Designed by naval architect Fulvio de Simoni, the new superyacht will be built at the Ferretti Group’s Ancona shipyard – another first for the Pershing brand.

The aluminium hull will provide the basis for a composite superstructure that de Simoni describes as “imposing but not too austere”.

Key features include an owner’s cabin situated to the fore of the main deck and two integrated side wings that help to shelter the cockpit.

As you would expect on a model of this size, the interior design and layout is largely bespoke, with owners invited to discuss their requirements with the Ferretti Group’s engineering department.

All three engine options are provided by MTU, with the largest set-up featuring four 2,600hp M94 engines for an estimated top speed of 38 knots.

The Pershing 140 isn’t due to hit the water until 2018, but Ferretti CEO Alberto Galassi is already getting excited: “I can’t wait for this incredible vessel to be built: I want to see it growing month after month.”