Motorboat & Yachting: Sunseeker’s latest superyacht design has been revealed in the form of the Sunseeker 131 – the second largest model to date to bear the Poole brand’s livery. The Sunseeker 131 Yacht will be launching next year, with accommodation for up to 12 and a cruising range of 1,500nm. 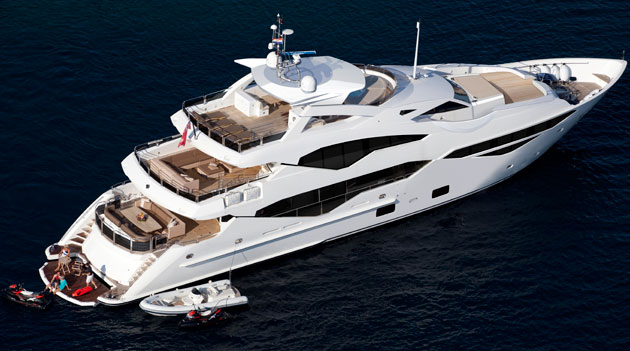 And although it is not due to launch until Spring 2016, the first four Sunseeker 131 hulls have already been sold, so any further buyers will have to wait until November 2016 to get theirs.

On-board accommodation features five double cabins as standard, although owners can increase this to 12 should they desire.

The stand-out feature is the trio of vast hull windows that should let huge amounts of light into the master suite, saloon and upper saloon.

Building on the same platform as the 40M Yacht, the Sunseeker 131 boasts an extra two metres of upper deck space, which means a new bar and seating layout is possible in the cockpit.

Meanwhile, the cavernous garage can swallow up a six-metre tender and a pair of PWCs. In keeping with Sunseeker’s latest big launches, the 131 is designed with long-distance cruising in mind.

Although the engine options haven’t yet been revealed, the company claims that it will do 1,500nm between fuelling stops when cruising at 10 knots. Should the owner want to go flat-out, for whatever reason, the notional top speed is 23 knots.

Sean Robertson, sales director at Sunseeker International, added that this is just the first of four new models that Sunseeker plans to roll out for the 2015/16 model year.