Motorboat & Yachting: Following the success of the inaugural event in 2014, the East Anglian Boat Show will be returning to Woolverstone Marina this weekend. 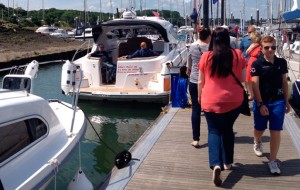 Woolverstone Marina will be hosting the East Anglian Boat Show for the second year running, with a selection of new and used boats on display this weekend (20-21 June). Vessels on display will range from 20ft-45ft and there will be plenty of opportunities for visitors to get on the water at this free event.

Fox’s Yacht Sales will be making their East Anglian Boat Show debut with four boats on display including the Bénéteau Antares 7.80, and the Barracuda 7. Broom Brokerage will also attending, with a pair of used models on display – namely a Broom 425 and a Broom 41.

Free car parking and family entertainment will also be laid on, while local charity the Woolverstone Project will be hosting a fundraising initiative. Organisers will be hoping to build on last year’s encouraging show (pictured above), when more than 2,500 visitors descended on the marina.

The 2015 East Anglian Boat Show will run at Woolverstone Marina from 10am to 5pm on Saturday 20 June and from 10am to 4pm on Sunday 21 June.