Posted on September 2, 2016 by Velos Insurance

Yachting Boating World: The New York based Gill Schmid Design has just unveiled its latest superyacht – the 110 metre Halycon. The vessel makes the most of floor to ceiling one-way glass. 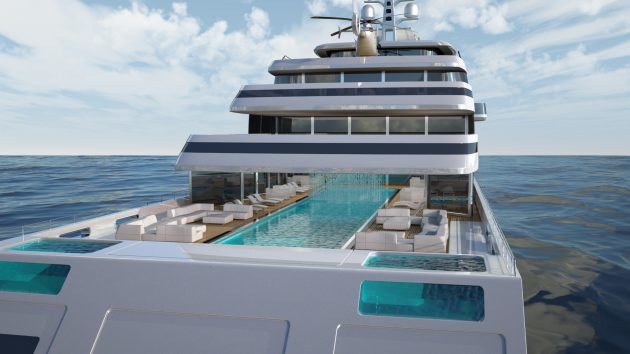 Halycon exploits the possibilities of using glass in superyacht design, with floor to ceiling undulating glazing.

Renders from Gill Schmid Design show a use of white and reflective glass, which provides maximum privacy for the owner of the 110 metre superyacht and their guests.

The white, one-way glass is transparent from the inside and opaque looking from the outside.

The white glass panels on the observatory deck above the wheelhouse and on bridge deck above the VIP suits blend in seamlessly with the white superstructure, giving an overall monochromatic effect.

“The idea is to blend superstructure and glazing into one entity,” explained Gill Schmid Design.

Some of the key features of Halycon are the two glass bottomed swimming pools, one on the main deck and one staggered in sections on the upper deck.

They are connected with a waterfall flowing between the two levels, which is framed by a generous rectangular opening in the deck. This creates the effect of terraced aft deck spaces.

This space is further enhanced by the louvered ‘gill’ glass doors on the main deck, creating a deep inside/outside space around the main pool area.

Further features of this unique vessel, besides the expansive and unique outdoor deck spaces, are the large owner suite with his and hers saunas, six guest and two VIP suites.

A retractable front facing glass facade on the observatory deck also highlights the unique use of glass on board.

The expansive beach club has open-able hull doors offering visual and physical access to the sea. There is also a gymnasium, sauna, plunge pool and massage areas.

The superyacht can accommodate 18 guests and 37 crew in generous quarters.

The unveiling of the Halycon project also marks the re-branding of the New York Design studio, which is run by Alistair Gill and Veronika Schmid.