200
swing
Main Menu
You are here: Home » Boats » HMS Illustrious to be sold for scrap

HMS Illustrious to be sold for scrap

Yachting Boating World: Despite attempts to turn HMS Illustrious into a floating museum or attraction, the Ministry of Defence has now confirmed the warship will be sold “for recycling”. 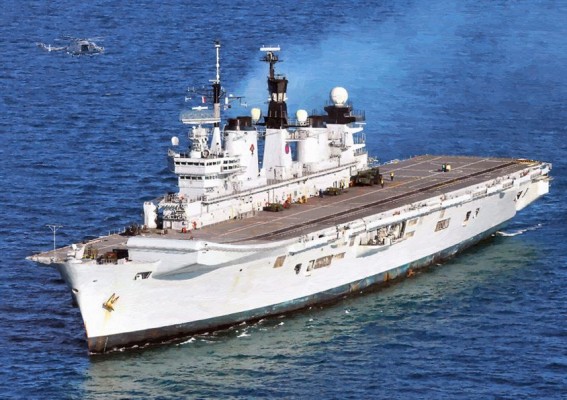 13 May HMS Illustrious, which served in the Falklands War, Bosnia and the Gulf, has been put up for sale for scrap by the Ministry of Defence.

The Disposal Services Authority (DSA) is inviting expressions of interest for the sale of the warship “for recycling”. The vessel is currently moored in Portsmouth Harbour after 32 years of active service.

The announcement comes following several attempts to preserve the 22,000-tonne HMS Illustrious, which is affectionately known as ‘Lusty’.

The last – selling the warship to Gibraltar as a maritime attraction – fell through last month because of the “prohibitive” maintenance cost of the aircraft carrier.

The DSA said the sale could be discontinued should “a heritage option” become open.

Bids for the warship must be in by 23 May with viewings in June.

HMS Illustrious was decommissioned in August 2014 at a service at Portsmouth Naval Base. At the time, the ship was the last Invincible-class carrier left – both her sister ships, HMS Invincible and HMS Ark Royal had already been scrapped.

12 April The HMS Illustrious Association is warning that the warship is at risk of becoming a ‘national embarrassment’ if action isn’t taken to secure the vessel’s future.

This comes as the Portsmouth News reveals that a deal to sell the 22,000 tonne vessel to the government of Gibraltar has fallen through.

The newspaper quotes a spokesman from the government, stating that it was giving “serious consideration” to plans to make the ship a maritime attraction in the British territory. However, the idea has been shelved because of the “prohibitive” maintenance cost of the aircraft carrier.

The President of the HMS Illustrious Association, Vice Admiral Bob Cooling told the newspaper that he would now rather see the ship scrapped if the Falklands warship could not be adequately preserved.

“Unless Lusty’s future is adequately funded to preserve her appearance and dignity as the UK’s longest-ever serving aircraft carrier then it would be better that she is scrapped rather than risk her becoming a national embarrassment,” he said.

The Vice Admiral believes ticket sales could have paid for the ship’s upkeep in Gibraltar.

“What better than such an iconic example of British naval heritage showcased in a vital overseas territory which itself reflects over 300 years of British maritime history?” stated Vice Admiral Cooling.

Responding to the concerns, an MOD spokesperson told YBW: “No decisions have yet been made on the future of the former HMS Illustrious and options for her sale are still under consideration by the Disposal Services Authority.”

HMS Illustrious was decommissioned in August 2014 at a service at Portsmouth Naval Base. At the time, the ship was the last Invincible-class carrier left – both her sister ships, HMS Invincible and HMS Ark Royal had already been scrapped.

‘Lusty’, as she is affectionately known, had been in active service for 32 years, including deployment in the Falklands War. The ship was replaced as the nation’s helicopter carrier by HMS Ocean.