Yachting Boating World: The Russian designer, Max Zhivov came up with the MYBO modifiable yacht system while playing with his daughter. He talks to YBW about the concept. 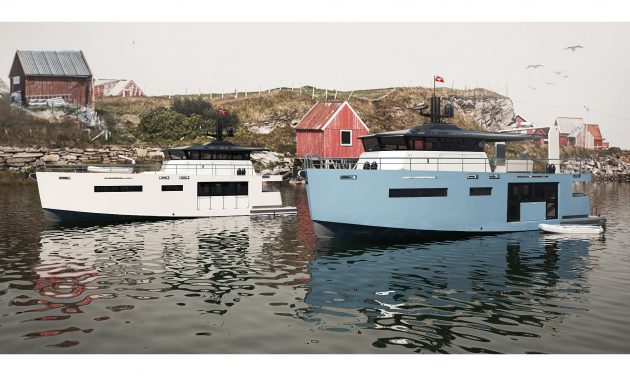 The Max Zhivov designed MYBO is essentially six boats in one. Each can be modified to meet the needs of the owner, whether the vessel is for carrying cargo, for fishing or just to spend time with the family.

The inspiration for the project came to the Russian designer while he was playing with LEGO with his daughter.

“The main idea of this concept is that on the basis of one boat it is possible to make six variants of models for different functional needs,” explains Zhivov.

“Constructive elements of the boat can be changed or moved according customer request. Here you can see the main principle of LEGO where simple elements are (the) basis for imagination development,” he states.

The different modifications to the 15 metre boat are made possible due to a number of interesting design features.

These include an upper wheelhouse made of prefabricated segments which can be moved around the boat, depending on layout.

The two metre by four metre hull openings can also be modified with either Triplex glass and vents, windows or panels with doorways.

“The owner can create a unique design of the boat,” says Zhivov. “Also, if the boat is sold, the next owner will be able to rebuild it for his own needs according to the indicated options.”

The MYBO modifiable yacht system is the latest design from the Russian who focusses on economical and environmentally friendly concepts.

Your Yacht Your Home, known as YYYH-40 m, included special features, such as a pilothouse that can move inside the hull when the yacht is at anchor.

Meanwhile, the 47 metre Sky Ya is a semi-displacement hybrid motor yacht. It combines modern yacht design with the latest solar energy technology.

As well as solar panels, the vessel comes with a unique garden feature, where guests can make the most of a green space even in the middle of the ocean.

Sky Ya also has full height glass windows in the main salon, allowing for breathtaking sea views and plenty of natural light.

It can accommodate a crew of 10 and is projected to have a cruising speed of 18 knots.

Posted in: Boats Tagged: Boats made of LEGO