Practical Boat Owner: Following a fire that swept through a series of old industrial and storage units on the site in Cowes, the owners of Medina Yard, the Harrison Trust, have been liaising with the Isle of Wright Council and businesses. 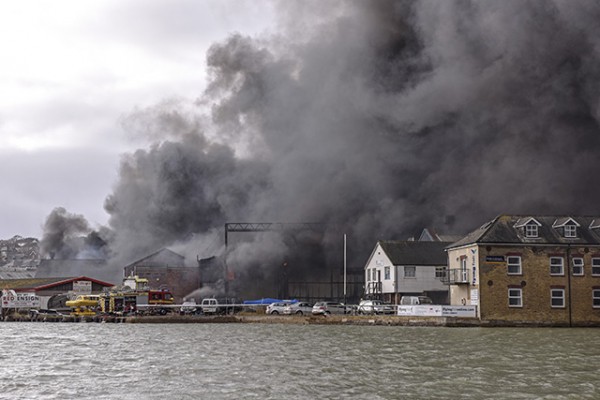 Monday, fire broke out in a car repair workshop and destroyed two classic yachts at the Moreton Marine premises and other boats were also lost in the blaze.


Accidental cause
Isle of Wight Fire and Rescue Service said: ‘Fire investigations has concluded it was an ‘accidental cause’ that started the fire.’

‘Our fire investigation is still on-going, but we can say that we are not looking for any suspicious cause. We can put it down to an accidental ignition. We have liaised with police – as we would with a situation like this – but there is no need to bring them in for this investigation”, said fire service group manager, Dean Haward, to Isle of Wight Radio.

Isle of Wight Fire and Rescue Service crews remained on site yesterday to avoid any further flare ups caused by high winds at the Medina Village, damping down and managing hot spots and advised the public to stay away from the site.

Moreton Marine’s Patrick said on his Facebook page: ‘Thanks for all your messages of support and offers of help. If you’re not careful I’ll take you up on it! All safe but very sad to lose Fedoa and all the hours of work by our great shipwrights. So close to finishing too…. Grrrrr!’

Motorboat & Yachting: Sealine dealer of the year Thames Boat Sales have announced that they will be opening a new office on the South Coast next month. Thames Boat Sales looks set to outgrow its name, after the Sealine dealer of the year announced plans to open a third office.

The brokerage, which is currently based in Bray and Penton Hook, will be opening a Southampton office at MDL’s Mercury Yacht Harbour on 1st of September 2015.

The new premises gives the firm a base on the River Hamble from which to sell models from the likes of Aquanaut, English Harbour Yachts, Sheerline and Sealine.

In addition to these four key brands, the firm hopes to add a sailing yacht partner in the near future. Heading up the new operation will be Alexander Legge, who previously spent eight years as head of sales at Mercury.

In a joint statement, Thames Boat Sales directors Chris Manners and Dominic Smulders, said: “A South Coast operation was a logical next step to enable us to bring our award winning customer service to the area and allow us to better serve new and existing customers.”

Yachting & Boating World: Two boatyard bosses from Devon have been accused of swindling customers out of of thousands of pounds in order to finance their struggling business.

Andrew Bowden and Paul Randle of Exe Leisure in Topsham Quay allegedly sold boats belonging to clients and then used the money to pay off business debts between August 2005 and June 2006.

Exeter Crown Court heard this week how a number of brokerage clients were told by the company that their boats were still up for sale, when they had actually been sold and the money paid into the company’s trading account.

In addition to this, six boats were bought on hire purchase by the company and allegedly sold, even though they still belonged to the finance company.

Exe Leisure went into administration in 2006, leaving a number of boat sellers and hire purchase companies more than £100,000 out of pocket.

Mr Randle denies fraudulent trading, while the jury have been told Mr Bowden does not form any part of this case. The 48-year-old, who is currently on trial at Exeter Crown Court, claims he was not involved in handling money and left the finances to Mr Bowden.

Mr Randle said previously that he was not aware the company had lost so much money and always believed there was enough to pay everybody should anything go wrong.

Prosecutor Malcolm Galloway said the pair “robbed Peter to pay Paul” when the company got into financial difficulties in 2005 and 2006. Money from client brokerage sales should have been kept in a separate account but was instead used to cover losses, the court heard.

Meanwhile, two of the boats sold were owned by a finance company and have never been traced. Mr Galloway said: “This was a company with significant financial difficulties. Bowden and Randle used unlawful and illegal ways to keep it afloat.

“When it came to brokerage, they were keeping other people’s money and putting it into their main business account rather than keeping it separate.”