Yachting Boating World: Turn your car into a boat! Turkish engineer Yusuf Kahvecioğlu didn’t have the money to buy a motor boat. Instead, he designed his Drive on Water prototype to open up boating to anyone with a car!

Frustrated because he was unable to afford his own motor boat, Yusuf Kahvecioğlu decided to design his own and built his Drive on Water prototype.

Known as D.O.W, he has now launched a Kickstarter campaign to develop the project.

He wants to raise $20,000 Canadian so he can modify the prototype.

“I made a prototype, it works fine but it is a little slow, needs more modifications,” explained Kahvecioğlu.

The D.O.W uses the car’s engine for power, and has the same horse power as the vehicle.

Facilities in the car, such as air conditioning and music system, can also be used while out on the water.

According to the project website, it is controlled by a joystick and can be used for cars with a maximum length of 5 metres.

“Now you can ride a boat while you are driving!” writes Kahvecioğlu on his Kickstarter page.

“Now you can ride a very cheap catamaran motor boat while sitting in your car. Your boat uses your car’s engine, electrical system, etc. If you have 150 HP car, now you have a boat with 150 HP engine. You also bring your car wherever you go by boat,” he explained.

Kahvecioğlu, who has previously designed planes, has collected just $327 from 11 backers so far but he is hopeful others will be inspired to support his project.

He is collaborating on D.O.W with physicist and designer Zafer Caner.

Caner has previously worked on other innovative projects including the Korea solar powered car. 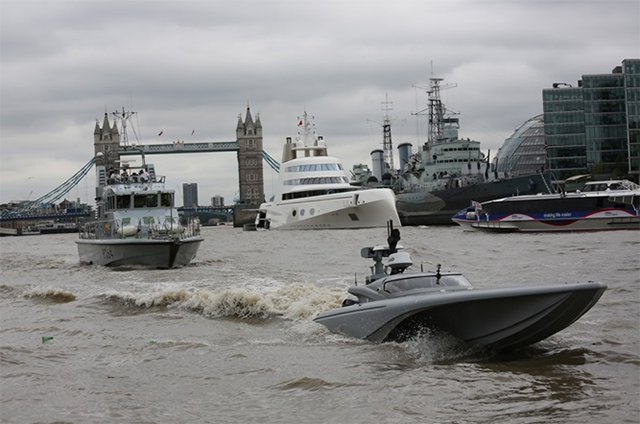