Posted on September 18, 2015 by Velos Insurance

Pratical Boat Owner: A yacht that crossed the Atlantic after being abandoned more than a year ago has been sunk just as its owner made a last dash to retrieve it. Yacht owner Thomas Mallunat left the boat, Troll, in October 2014 near Bermuda because of a medical emergency with his wife. 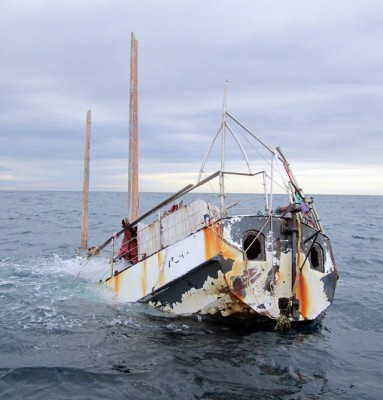 Although never expecting to see it again, he was advised of a recent sighting by an Irish Maritime Patrol Aircraft and travelled to Cornwall in the hope of retrieving the boat, however it had been sunk in the meantime.

Spokesman for Defence Forces Ireland said the Naval Service received some correspondence from Mr Mallunat after the yacht had been sunk last month.

The spokesman said: ‘Although obviously disappointed, he does not seem to bear any ill will to the Irish Naval Service and appears to accept the rationale. He had in fact left hatches open when he abandoned it as he did not want the empty boat to be a hazard.’

This cruiser was adrift in the UK Search and Rescue area of responsibility (that lies within the Irish Exclusive Economic Zone).

This position was approximately 131 nautical miles south west of Mizen Head, on the south west coast of Ireland.

The spokesman said: ‘This was a prudent measure taken because the vessel was adrift in the transatlantic shipping lanes and was deemed to be a navigation hazard to merchant traffic. No pollution emanated from the vessel when it sank.’