Duke and Duchess of Cambridge cheer Sir Ben to victory

Yachting Boating World: The Duke and Duchess of Cambridge gave their support to Sir Ben Ainslie’s Land Rover BAR team as they took podium position in Portsmouth on 23-24 July. 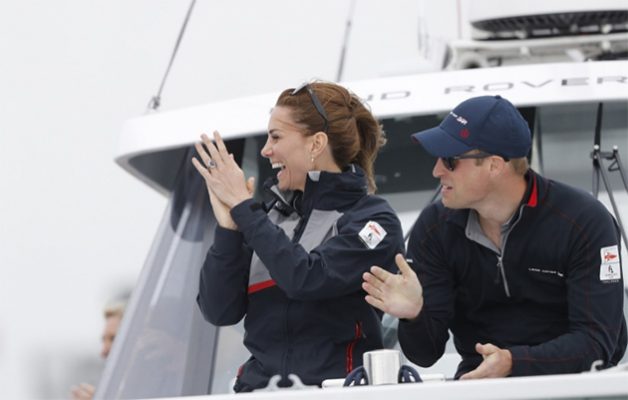 Along with thousands of fans, the Duke and Duchess of Cambridge got fully behind Land Rover BAR as they stormed to victory in the Portsmouth regatta.

Sir Ben Ainslie’s team put on an incredible performance on both Saturday and Sunday and did enough to hold off USA Team Oracle from the top of the leader board.

Speaking after the win, skipper Sir Ben said: “It was a real team work day, these boats are really hard to handle on such a short course. The guys did an incredible job with the boat handling and that’s what really got us out of some of those tough situations.”

He continued: “Full credit to the team and everyone back at the Camber at the base, we’ve got a hundred odd people there, designing and building boats and components for the Cup next year, and I think it’s a big moment for them as well to know that we can go out and win these events.”

Trimmer Nick Hutton, added: “It was awesome to win at home, it’s obviously the key event of our year. It is like Wembley for us.”

“The big picture is we have taken the lead in the World Series, for us as a new team it’s fantastic to go up against the established teams like Oracle, Artemis and Team New Zealand. It’s great moving forward into the future,” he stressed.

Grinder Freddie Carr said the win was an important step.

“We are in a massive phase of our Cup campaign at the moment, going into Bermuda next year and the lift this gives to everyone at the base – it’s huge,” he stressed.

“We are putting a real line in the sand for where our sailing team is at and our test boats are going really well. We are front-footing it right now it’s a great time for us,” continued Carr.

Land Rover BAR are now series’ leaders, with just one point separating them from Jimmy Spithill and his team.

There are just two events left in 2016. The next will take place in Toulon, France on 8-11 September.