Yachting Boating World: Joe Clarke is the first British athlete to ever take gold in the men’s K1 canoe slalom. 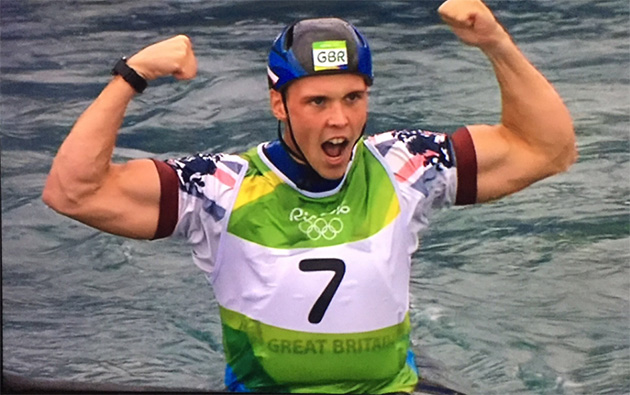 The 23-year-old secured Team GB’s second gold medal of the Rio 2016 Olympic Games after a faultless run and time of 88.53 seconds.

He had been third fastest in his semi-final, but his quick run meant that Slovakia’s Peter Kauzer and Jiri Prskavec of the Czech Republic were left with silver and bronze respectively.

The win makes Clarke the first British athlete to claim a medal in the event since Campbell Walsh picked up silver back at Athens 2004.

Speaking following the race, Clarke said: “I went out on that final run, laid it all on the line, put my all out there and that was enough to come away with the Olympic gold medal”.

“When I crossed the line and knew I had a bronze I was absolutely ecstatic. It got even better when that upgraded to a silver and then upgraded to a gold,” continued the gold medallist.

“To wake up this morning thinking this is actually the finals of the Olympics and I could come away being the Olympic champion is just like wow,” continued the canoeist.

“For sure I’ve had some luck and you need a bit of luck in this sport to excel and that has come today. I don’t know what I did to deserve that but I obviously did something right along the way,” said a delighted Clarke.

Prior to his gold medal win, Clarke had taken silver in the men’s K1 event at the 2014 World Cup 5, his first senior international medal.

At the 2015 World Championships at Lee Valley, he was part of the bronze medal winning K1 men’s team.

He was selected to represent Team GB after winning the men’s K1 event at the 2015 Canoe Slalom Olympic Selection.