Yachting Boating World: The Mersey ferry, Royal Iris ran aground and started taking on water near to the entrance of the Manchester Ship Canal at Eastham. 69 passengers were on board. 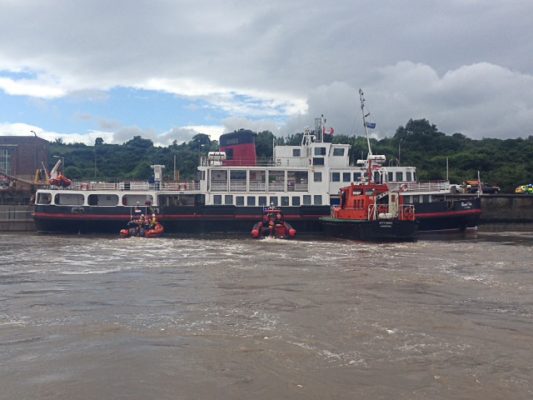 More than 70 people were rescued from the Royal Iris passenger ferry after it ran aground and started sinking on the afternoon of 10 July. The grounding at Eastham, Wirral, resulted in a hole in the hull.

The vessel, which starting taking on water at the stern, was carrying 69 passengers and five crew members.

The multi-agency rescue operation involved the New Brighton RNLI, the Merseyside Fire and Rescue Service, the Port of Liverpool Police, HM Coastguard and the North West Ambulance Service. No one was hurt in the incident.

A spokesman for the Merseyside Fire and Rescue Service said it sent two fire engines to the scene.

A dredger, Deo Gloria, assisted in pumping out water from the ferry and took the ferry passengers on board.

Merseyside Fire and Rescue Service, with the assistance of New Brighton RNLI and a Liverpool pilot boat, Kittiwake, helped move both the Deo Gloria and the Royal Iris in to the QE2 Dock at Eastham.

A spokesman for New Brighton RNLI said: “Our lifeboat, Marine Fire One and the Kittiwake positioned themselves using their bows along the side of the ferry to ensured it kept position while it was being towed into the lock by the dredger.”

The dock gates were closed and passengers were helped to disembark from the dredger on to the quayside.

Firefighters assisted in pumping out the water from the ferry while awaiting the arrival of two further tugs.

The passengers had been booked on a day trip along the Manchester Ship Canal.

The Marine Accident Investigation Branch has now started an investigation into the incident.