Storm-struck solo sailor thanks RNLI for saving his life

Practical Boat Owner: A single-handed yachtsman has praised RNLI Castletownbere rescuers for saving his life after he got into difficulties 45 miles south of Mizen head in West Cork. 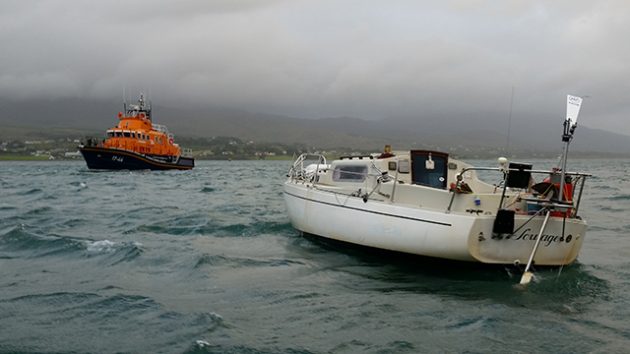 The Castletownbere lifeboat, Annette Hutton, launched at 8am on Saturday morning, 20 August, after Valentia Coast Guard Radio requested assistance for the yachtsman.

The eight-metre (26ft) yacht had left the Azores in early August. The sailor, aged in his sixties, had been in regular radio contact with Valentia Coast Guard radio until Saturday morning when his VHF radio was washed overboard. He activated an EPIRB to identify his location, raise the alarm and seek help.

The lifeboat, under the command of Coxswain Brian O’Driscoll, located the casualty at 10.40am. 50 miles south-west of Castletownbere. The Coast Guard helicoptor also attended the incident.

Conditions were described as ‘gusting Force 8/9 winds with a 30ft swell’.  The yacht was taken under tow and the lifeboat proceeded slowly to Castletownbere in challenging sea conditions.

Early into the tow lifeboat crew became concerned about the well being of the sailor and crew managed to transfer him to the lifeboat. The lifeboat, with the damaged yacht in tow, returned to Castletownbere at 8.30pm. having been at sea for 12 and a half hours.

The sailor thanked the Castletownbere lifeboat and all involved for ‘saving his life’. He said: ‘only for the lifeboat, things would have ended up very badly today’.

Castletownbere lifeboat operations manager Tony O’Sullivan said: ‘The coxswain and crew are to be complimented on the rescue – they demonstrated skill, seamanship and endurance during what was a long and challenging day.’