Practical Boat Owner: The ‘importance of carrying a good VHF radio and not relying on a mobile phone’ was demonstrated when a yacht got into difficulties in the eastern Irish Sea. 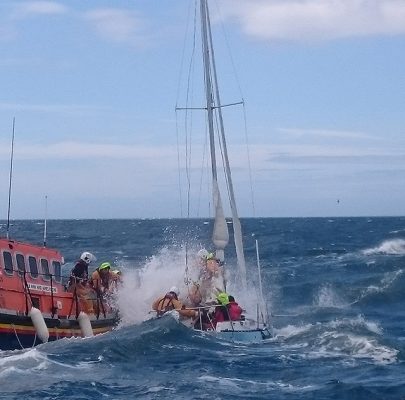 A Mayday call was made from the cruiser when the three people on board were overcome by ‘rough sea conditions, severe seasickness and exhaustion’.

Ramsey RNLI lifeboat was launched at 09:17 on Friday, 8 July, to search for the yacht, which was ‘somewhere between the Isle of Man and Fleetwood’.

Since the exact position of the yacht was unknown, Douglas and Barrow RNLI lifeboats were also launched.

The yacht had set off from Fleetwood at 14:00 on Thursday, 7 July with the intention of sailing to the Isle of Man. At 06:00 the next day, they were within 10 miles of the island but decided to turn around because of deteriorating weather conditions and seasickness.

The Isle of Man’s Steam Packet vessel Ben My Chree, en route from Douglas to Heysham, also picked up the Mayday call, and, with her officers making best use of her elevated bridge and radar, joined the search.

Since the yacht was beyond the range of the lifeboats radios the Ben my Chree became an essential link relaying messages to the lifeboats. Castletown Isle of Man Coastguard rigged their mobile radio direction finding equipment on Douglas Head and determined a radio bearing for the yacht.

A short time later the Ben My Chree identified a radar target which they believed to be the stricken yacht and diverted course to investigate, due west of the Duddon Estuary close to the wind farm. On confirming the vessel’s identity Ben My Chree carefully manoeuvred alongside to give the yacht some protection from the weather.

Coastguard Rescue Helicopter 936 from Caernarfon was scrambled in case an airlift was required.

Ramsey RNLI lifeboat, with coxswain Mark Kenyon at the helm, arrived on scene at approximately ‪11:00. Two of Ramsey’s volunteer crew, a doctor and a first aider, were quickly transferred to the yacht to assess the condition of the three people on board and to prepare a tow.

Once it was ascertained that there was no requirement for an airlift, the helicopter was stood down. With Douglas lifeboat standing by, Ramsey lifeboat established a tow.