Motorboat & Yachting: Three men were arrested last week after sneaking into the country on board a brand new Broom 35 Coupe. 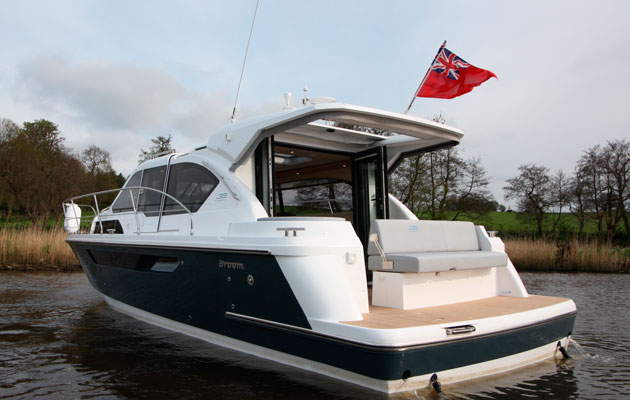 Bushnells Marina was the site of a dramatic escape last week, when three stowaways fled from a brand new Broom 35 that was being delivered.

Two men in their 20s from Pakistan and a man in his 30s from Iran leapt from the coupe when the transporter lorry stopped outside the West Berkshire marina.

It is believed that the men snuck on board the brand new Broom 35 while it was being transported across the channel on a car ferry.

Broom have promised to take the boat back to their Brundle facility to be cleaned up and returned to pristine condition, after drugs and dirt were found on board.

The Broom 35 in question had crossed the Channel to take part in the launch of Broom’s French office in Port d’Auxerre, Burgundy last month.

New owner Ian Tritton told the Henley Standard that although he was satisfied with Broom’s reaction to the incident, he was “annoyed” that Border Control had allowed this to happen in the first place.

“Given the situation in Calais, these guys have obviously been spreading around ports in France looking for a way to get across,” Mr Tritton told the local newspaper.

“It’s a very sad situation for them and we feel for them but in this case we are annoyed at the various people involved, like the boat’s transporters and Border Control,” he added. “They need to be much tougher. Our private space has been violated.”