Motorboat & Yachting: Saracens has signed a two-year deal with Garmin, which will see gWind sensors fitted to the goalposts at Allianz Park. 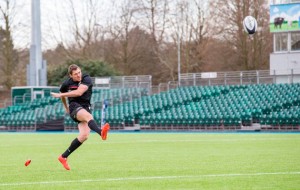 In the highly competitive world of professional rugby union, teams are always looking to get an advantage, but Saracens have turned to a slightly unusual source.

Marine technology firm Garmin has signed a two-year deal with the North London team that will see wind sensors fitted to the goalposts at Saracens’ home stadium, Allianz Park.

The gWind system (pictured right) will wirelessly relay information to the kicking coach Dan Vickers’ Garmin Quatix GPS watch, allowing him to advise the kicker on the prevailing windspeed and direction.

Garmin claims that this technology will be used during training and before a game to capture the most accurate information. Previously, rugby union teams had used flags to determine the wind direction, but Vickers claims that this is a huge step forward:

“At Saracens we’re really keen to trial and pioneer new technology. Historically, we’ve used flags, but we wanted to explore a more technical solution to this, so we turned to Garmin.

“We are now able to determine the speed and direction of the wind much more effectively during training, which in turn enables us to advise our kickers.”

Saracen’s next home match is against Exeter Chiefs on Sunday (May 10). The team currently sits in third place in the Aviva Premiership with three games left to play this season.